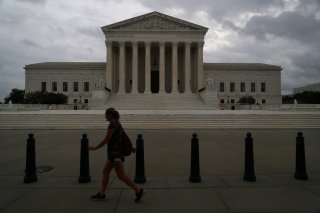 On Wednesday, the Supreme Court issued a controversial decision indicating it would not swiftly strike down Texas’s strict abortion law, which effectively bans abortions after the fetus’s heartbeat can be felt—a deadline that occurs at six weeks, well within the first “trimester” established in the landmark 1973 Supreme Court case Roe v. Wade.

While the Supreme Court has struck down similar laws in Missouri, Mississippi, and Georgia in past months, it decided to allow Texas’s “Heartbeat Act”—for the time being—on the basis that it did not compel government officials to block abortions, but allowed private citizens to file civil suits against women who received them, or anyone who assisted in the abortion, from doctors to Uber drivers. According to the law, citizens can receive up to $10,000 for doing so—a program that the law’s detractors have compared to a “bounty” system on abortions.

In response to the new law, a website called “Pro-Life Whistleblowers” was created by Texas Right to Life, a prominent anti-abortion activist group, in July. The website solicited “tips” from Texans who believed they had witnessed abortions, encouraging them to identify doctors who may have violated the Heartbeat Act.

However, after the website was created, pro-abortion activists took to social media to encourage Internet trolls to target it with fake reports.

“Gosh, I wonder if they factored in people abusing the integrity of this system,” one user sarcastically wrote.

“Feeling helpless and mad?” singer Kathleen Hanna tweeted on Wednesday evening in response to the Supreme Court’s decision. “Let’s flood this site with so much stuff that they have to shut it down.”

In response to that tweet, some posted screenshots of joking “tips” they had sent in to the website. Others took the opportunity to criticize Texas Gov. Greg Abbott, who they argued had endangered adult Texans’ heartbeats by opposing mask mandates in the state.

However, many creators appear to have submitted serious-sounding reports that the website’s staffers would waste time investigating, rather than obviously false ones that could be discounted immediately. On the social media website TikTok, for instance, one creator, @BlackMadness21, created a script that would input hundreds of realistic but false reports to the website.

Kimberlyn Schwartz, communications director at Texas Right to Life, took the tip line’s newfound fame in stride. In comments to Texas-based outlet Spectrum News, she claimed to welcome the form’s attention on social media, arguing that it would spread awareness of the group’s mission.

However, the website’s form appears to be no longer accessible as of Thursday night.