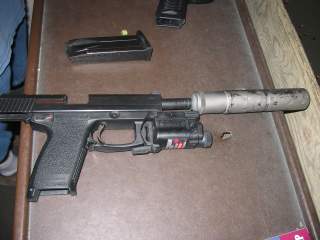 In the 1990s, the US Special Operations Command wanted an offensive handgun. Most handguns then issued to the military were intended to be defensive weapons for when a primary weapon, a rifle or other long gun, was out of action.

The offensive handgun, on the other hand, was envisioned as a weapon that could as a primary weapon for special purposes, such as silently eliminating sentries. To best accomplish those tasks, the project, called Offensive Handgun Weapon System (OHWS) required that submissions include a suppressor and laser aiming module.

The program was notable as it was the first joint program run by SOCOM. The resulting handgun was supposed to amalgamate the features of the myriad of handguns being used by special units of different branches under the command into a single firearm.

The H&K submission won the OHWS program and was adopted as the Mk 23 Mod 0 in 1995. Arguably over-engineered, the pistol was massive but incredibly reliable (experts have referred to it as the “most tested handgun in the world”) and accurate.

While the operating mechanism of the pistol is relatively simple, a variation on the Browning tilting barrel action (unlike H&K’s earlier pistols that tended to use some sort of delayed blowback), there are a lot of additional features. A recoil buffer (a second buffer spring inside the main recoil spring and guide rod reduces the felt recoil.

The controls of the Mk 23 are sometimes described as too complex. While most pistols will have one or two levers within easy reach of the shooter’s thumb, the Mk 23 has three, probably due to “design by committee” resulting in all controls of the pistols being placed on the gun.

The suppressor was also notoriously over-engineered. SOCOM’s requirement for the suppressor was beyond anything that was available commercially at the time, 30 dB of sound reduction, dry. H&K submitted their own suppressor to the program, but it only achieved 22.2 dB of reduction with FMJ ammo and 15.2 with +P ammunition.

The American Knight’s Armament Company submitted a suppressor with the rival Colt Offensive Handgun that yielded better results: 28.8 dB with FMJ and 26.6 with +P. Program managers quickly asked KAC to develop a suppressor for the H&K handgun.

However, KAC’s suppressor required significant engineering to be adapted to the H&K design. Most suppressors when attached to tilting barrel designs don’t work properly as the mass of the suppressor affects the amount of force required to tilt the barrel to unlock. The earlier H&K P9S was an easy suppressor host because it had a fixed barrel.

KAC had to add a special component called a “Nielsen Device” to its suppressor design to make it function properly with the Mk 23. Essentially a piston inside the suppressor, it harnesses some of the gas captured in the suppressor to provide an opposite force until the slide unlocks.

The KAC suppressor was part of the final package that was accepted and issued in 1995 and is only one of two suppressors that are endorsed by H&K to work reliably on the Mk 23, the other being the Swiss B&T Impuls II.

The resulting pistol, as innovative and well engineered as it was, was a flop. Colloquially referred to as the “Crew-served handgun,” the Mk 23 was too large and heavy to be practically carried in most roles, with only the SEALs part of SOCOM really using the type in large numbers.

As a suppressed handgun in a secondary role, the Mk23 was replaced by an evolution of itself, the Mk24 in SEAL service.

However, the need for a small and handy light weapon that was accurate and could be used as a primary weapon remained. Mk23s when they were used, were often issued to dog handlers and similar people who were often busy with both hands yet needed a weapon in combat.

But SOCOM’s recent acquisition and testing of super-compact SIG Rattler carbines in .300 Blackout may suggest that they have become the next light and compact weapon. The .300 Blackout suppresses sound better than the 5.56, and the very short barrel and folding stock of the Rattler makes it not much bigger than the MP7.