Introducing Russia's 'New' T-72 Tank (Thanks To Some Deadly Upgrades) 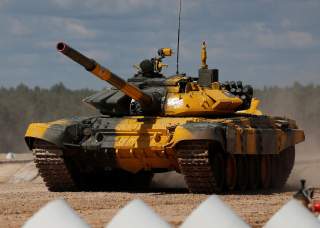 Logically, such an upgrade to the T-72 would be popular worldwide, given the massive number of countries that operate T-72s.

But the T-72B3 is only used by Russia and its close neighbor, Belarus. A variety of T-72 upgrades and configurations have been developed by Russian and even Ukrainian for export, but none have found major success.

However, the T-72B1MS “White Eagle” may prove to be a change in this trend. Utilizing technology taken from the T-72B3, this export tank may give customers a lot of the advantages of the T-72B3 in an export-ready package.

Like the T-72B3, the primary upgrade of the T-72B1MS is Sosna-U thermal imager. The sight modernizes the fire control system and provides thermal vision to the tank gunner.

This gives the T-72B1MS superior battlefield awareness compared to the T-72B3, but overall the project is more modern than the B3 upgrade so more modern functionality should be expected. Similar sights have been installed on the Russian T-90M tanks.

The reason for this may be the intended market of the T-72B1MS. Originally developed for a Nicaraguan contract, the tank has also been exported to Uruguay. In the close jungle and mountain environments of South and Central America, thermal imagers provide an important capability. Other nations in the region don’t have very advanced tanks or tank rounds, so lighter ERA may have been chosen to keep costs and weight down, increasing strategic and tactical mobility.

While the T-72B1MS isn’t really something the militaries of Europe or the US should be worried about, it’s an interesting take on the T-72 for the South American market that could prove uniquely lethal in its intended theater.

Acquisitions of the tank could drive a minor arms race, as the tank significantly outclasses the Brazilian Leopard 1A5 and Argentine TAM tanks in armor and firepower. Only Chile fields a comparable tank in the Leopard 2A4.