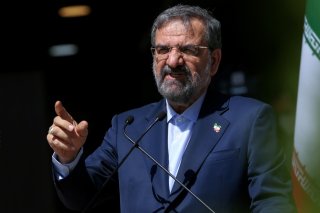 On January 8, a Dassault Falcon 900EX executive jet (tail number EP-IGC) owned by the Iranian government took off from Tehran, heading west. Aboard the plane was an Iranian delegation traveling to Managua, the capital of Nicaragua, where the local dictator, Daniel Ortega, was to be inaugurated to his fourth term as president two days later.

But this was no ordinary delegation. At its helm was Mohsen Rezaee, the former commander-in-chief of Iran’s Islamic Revolutionary Guard Corps (IRGC) and Tehran’s current vice president for economic affairs, who helped plan the 1994 bombing of the AMIA, the Buenos Aires Jewish cultural center. It was the deadliest terrorist attack in the Western Hemisphere before 9/11, killing eighty-five people and wounding 229 others.

The victims’ families have been waiting for justice for twenty-eight years. Rezaee belongs in a courtroom, not at a presidential inauguration. Countries should not welcome him; they should arrest him.

In 2007, Interpol issued a red notice issued for Rezaee for “aggravated murder and damages,” after, in 2006, Argentina had issued an international arrest warrant for his role in the AMIA bombing. In 2019, Argentina also added him to its terrorist list. In 2020, the U.S. Department of the Treasury sanctioned Rezaee. In 2019, Washington designated the IRGC as a foreign terrorist organization.

These developments may explain why Rezaee’s plane made a circuitous journey. It first crossed the airspace of Turkey and Greece, flew over southern Italy, then Tunisia, on to Algeria, before entering Mauritania’s airspace. After less than two hours on the ground, the Dassault Falcon took off again. Destination: Caracas, Venezuela. Its flight path studiously avoided the Republic of Cape Verde. From Caracas, Rezaee’s plane flew to Managua, this time avoiding Colombia’s airspace.

The flightpath quirks suggest that Rezaee feared that some countries would force his aircraft to land in order to arrest him. Such an occurrence would have precedents. In June 2020, Alex Saab, a Venezuelan regime crony in charge of coordinating sanctions evasion with Iran, was arrested during a technical stopover in Cape Verde while on his way to Iran. A few months later, in October 2020, Cape Verde authorities prevented the landing of an Iranian cargo plane owned by the IRGC. The airline was likely carrying weapons from Iran to Venezuela.

As we write, flight tracking websites indicate that Rezaee’s executive jet is still on the runway of Managua’s international airport. But his presence in Managua has become public knowledge and triggered condemnation from Argentina’s government. His journey back, even without stopovers, needs to cross the sovereign airspace of numerous countries in the Caribbean and the Mediterranean. Many are U.S. allies. All are members of Interpol.

Will they deny him transit rights or force him to land so that he can be arrested and finally face his day in court? Will the United States, the only country with the leverage and means to produce such an outcome, use its diplomatic influence to ensure Rezaee’s journey home never happens? Or will the Biden administration, currently entangled in a race to conclude nuclear negotiations with the clerical regime in which Rezaee serves, choose to let him go?

Iran is testing not only the will of the United States but of the international community. If Rezaee travels with impunity, Iran will seek to further push the limits, and legitimize the accused in the same way that it has done with near impunity in the nuclear file. Interpol’s own credibility is at stake as well.

In previous diplomatic rounds with Tehran, Washington sacrificed principle and compromised justice, with little tangible benefit. During the run-up to the 2015 nuclear deal with Iran, formally known as the Joint Comprehensive Plan of Action, Washington slow-rolled and mothballed investigations against Iran-backed Hezbollah’s narco-trafficking and money laundering activities in Latin America, for fear of crossing Iranian negotiators. In recent months, the Biden administration has failed to enforce key sanctions against Iran and to impose meaningful military consequences for Iranian provocations against U.S. forces in the Middle East.

Criminals like Rezaee should not receive a free pass to jet set. That Nicaragua and Venezuela, two close allies of Tehran and themselves rogue regimes run by brutal dictators, are giving him carte blanche to travel is to be expected. But the United States, and those nations that might let him fly across their airspace, should make sure a wanted fugitive faces justice.

Emanuele Ottolenghi is a senior fellow at the Foundation for Defense of Democracies (FDD), where Toby Dershowitz is senior vice president for government relations and strategy. FDD is a non-partisan, Washington-based research institute focused on national security and foreign policy. Follow them on Twitter @eottolenghi and @TobyDersh.