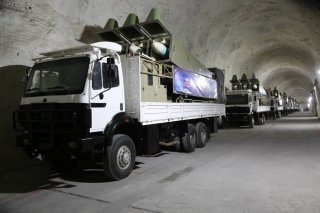 On November 27, 2020, Mohsen Fakhrizadeh, Iran’s chief nuclear scientist, died in a hail of gunfire from what appears to have been a remotely controlled gun nest. The following day, Sepah News, the Islamic Revolutionary Guard Corps’ official mouthpiece, published an article that eulogized Fakhrizadeh and stated, “Martyr Fakhrizadeh had placed the strengthening of the defensive power against weapons of mass destruction at the top of his scientific activities.”

Defensive power, of course, neither equates to civilian energy generation nor the desire for medical isotopes, the two most frequent explanations Iranian officials provide inspectors and their Western counterparts. Almost every nuclear power describes their nuclear missile program as defensive in nature, and so the Revolutionary Guards’ embrace of the term should not surprise.

Of course, it may be easy to cherry-pick loose rhetoric statements given the Islamic Republic’s traditional bombast, but Sepah’s statement appears more the rule than the norm. Consider, for example, the death of Major General Hassan Moghadam, a pioneer in Iranian missile development, in an explosion at a Revolutionary Guard base outside Tehran on November 13, 2011. What the Iranian government neglected to mention in their denials about the military nature of Moghadam’s work was his last will and testament that the Revolutionary Guards subsequently published (but which is no longer online). In it, Moghadam asked that his epitaph read, “The man who enabled Israel’s destruction.”

President Barack Obama and Secretary of State John Kerry said they took solace in Supreme Leader Ali Khamenei’s supposed fatwa against nuclear weaponry. Iranian diplomats often quote that fatwa inconsistently, however, and with divergent verbiage raising questions about whether it exists in any form to which the Iranian government can be held accountable. Senior Iranian religious figures including those in Khamenei’s inner circle, however, have endorsed nuclear weaponry in much the same terms that Sepah does now. A September 2005 editorial in Marefat, a journal that belonged to Ayatollah Mohammad Taqi Mesbah Yazdi, a Khamenei confidant who passed away on January 1, 2021, said that "the Quran calls on the faithful and the Muslim nation to acquire maximum power to be able to deter the enemies of religion and humanity." It added, “Deterrence does not belong to just a few superpowers.” This is just one of many examples.

The Biden administration appears ready to re-enter the Joint Comprehensive Plan of Action, the so-called 2015 Iran nuclear deal, if Iran itself returns to compliance. Secretary of State-nominee Tony Blinken and incoming National Security Advisor Jake Sullivan suggest they then would be open to further negotiations to resolve other issues of dispute such as Iran’s ballistic missile program. In the rush to diplomacy, it may be tempting to dismiss the Islamic Revolutionary Guard Corps’ rhetoric as just bluster. This would repeat the mistakes of the Obama administration, however. While Iranian Foreign Minister Mohammad Javad Zarif might be the interlocutor of choice, Iran’s nuclear scientists do not answer to Iran’s foreign ministry nor, indeed, are any of the military or security apparatuses within the Islamic Republic under the direct control of the presidency or the ministers he appoints. Rather, the Revolutionary Guard controls both the ballistic missile and satellite launch capability, the technology for which doubles as a delivery system, and other possible military dimensions. Put another way, what the Revolutionary Guards say matters. European diplomats, Congressional Democrats, and those calling for restraint regardless of an adversary’s behavior might want to believe Iran’s intentions are peaceful and the problem lies more in Washington, Jerusalem, and Riyadh than in Tehran, but the Revolutionary Guards, at least when they write for their home audience, beg to differ.