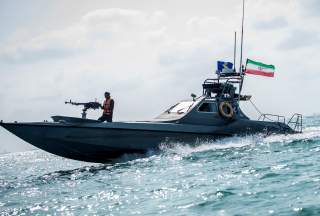 Iran plans to build attack speedboats that can reach speeds of 100 knots.

“By tapping into the capabilities and technical expertise of our domestic elite, we will move toward production of speed vessels that can travel at the speed of 100 knots [per hour] in the near future,” Rear Admiral Alireza Tangsiri, commander of the Islamic Revolution Guard Corp Navy announced.

"Today, marine vessels that cruise at 90 knots per hour will be unveiled," he added.

This is the latest in a series of Iranian press reports that claim sophisticated capabilities for the nation’s flotillas of armed speedboats, which are actually taken seriously by U.S. and other navies that fear their warships could be overwhelmed by swarms of small attack craft.

In December 2018, Tangsiri claimed that IRCGN would be equipping with stealth technology.

“We are planning to equip the IRGC’s speedboats with radar-evading stealth technology while increasing their speed in order to conduct their missions,” the Iranian commander said, according to Iran’s PressTV. “New missiles moving at very high speed are being installed on the IRGC’s naval vessels.”

Iran has more than 1,500 fast attack craft, armed with anti-tank missiles, rocket-propelled grenades, recoilless rifles, machine guns and even multiple rocket launch systems that turn pleasure craft into floating Katyushas. The Seraj-1 is a militarized copy of Britain’s Bladerunner 51 speedboat, a 16-ton, 45-foot-long speedboat that can zoom over the water at 65 knots.

“The boat, powered by two 1,000-horsepower engines, reportedly conducted in 2005 a tour of the British Isles in a little more than 27 hours at an average speed of 63 knots,” noted Britain’s Daily Telegraph. “In late 2005, it smashed the Round Britain World Record in 27 hours and 10 minutes at an average speed of 63.5 miles per hour, proving its astounding offshore capabilities.”

These boats are a basis of an Iranian strategy that combines two approaches: old-fashioned guerrilla warfare and twenty-first century swarm tactics. Iranian fast attack craft will strike suddenly in the narrow waters of the Persian Gulf, emerging from nearly Iranian coastal bases to form wolfpacks that will pounce on hostile warships and tankers. They will take advantage of their speed and numbers to swarm their opponents, a method that is also being developed for aerial drones.

It is a highly practical strategy for Iran, which can’t hope to match the United States and its allies with big-navy aircraft carriers, cruisers and destroyers. But Iran doesn’t need to refight the Battle of Leyte Gulf. Today’s warships are unarmored vessels laden with sensitive electronics. If a speedboat can get close enough to fire a salvo of rockets or even machine guns, it can do significant damage. A swarm of speedboats might even inflict fatal damage on smaller warships such as frigates and destroyers.

This threat won’t keep the U.S. Navy out of the Persian Gulf if Washington so desires. But it might pose such as ominous threat that it would deter an amphibious landing on the Iranian coast, or—perhaps more important—deter commercial vessels and the ever-watchful maritime insurance companies from transporting the oil that fuels so much of the world’s economy.