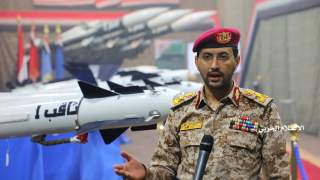 Key Point: The war in Yemen isn't over just yet...

Add surface-to-air missiles to the growing list of advanced weapons—such as cruise missiles, ballistic missiles, and armed drones—that Iran is smuggling to its proxy, the Houthi rebels, in Yemen.

Clearly, Iran has no interest in ending the nearly 5-year-old Yemeni civil war, stopping its proxy conflict with the Saudi-led coalition—or shortening its long list of malign, destabilizing behaviors in the Middle East.

The latest revelation of Iranian arms running is based on recently released reports from the U.S. Central Command of the U.S. Navy’s and U.S. Coast Guard’s successful intercept of weapons shipments in the Arabian Sea bound for Yemen.

They have made two interdictions since last November, the most recent of which involves the U.S. Navy guided-missile cruiser USS Normandy’s seizure in early February of a “stateless” small craft, locally known as a dhow, loaded down with a cache of Iranian weapons.

According to U.S. Central Command:

The Navy’s guided-missile destroyer, USS Forrest Sherman, seized a similar shipment in November, which included components for the “351,” likely the Quds-1 land attack cruise missile, possibly similar to those used last fall in the Iranian attack on Saudi oil facilities.

The Forrest Sherman also captured components for the Iranian Noor anti-ship cruise missile, according to a CENTCOM spokesman. The Noor, based on the Chinese C-802 missile, has a range of 120 kilometers and can be ship- or land-based.

Besides prolonging the bloody conflict in Yemen, the direct or indirect supply, sale, or transfer of weapons to the Houthis is a violation of 2015 U.N. Security Council Resolution 2216.

Though only a small portion of the weapons were seized in these at-sea interdictions, the Navy’s intercept of a total of eight new Iranian “loitering” surface-to-air missiles, known as “358” missiles, is potentially significant.

Though CENTCOM passed on detailing the operational capabilities of the 358 missile in a press briefing, these weapons reportedly can hunt and then kill airborne targets such as helicopters.

Unlike other weapons the Iranians have copied, such as the Chinese C-802 anti-ship cruise missile or the Russian Kornet anti-tank guided missile, CENTCOM called the 358 a “uniquely Iranian-designed missile.”

This new loitering surface-to-air missile represents a troubling development in Iran’s military arsenal. Indeed, at some point the 358 missile could expand its capabilities to include other land- and sea-based targets.

For instance, if adapted to a sea-strike mission, this new weapon could increase Iran’s existing threat to military and commercial shipping around Yemen, including in the Red Sea, Bab al-Mandeb Strait, Gulf of Aden, and Gulf of Arabia.

Moreover, the proliferation of another advanced munition to a non-state actor such as the Houthis is deeply troubling. We already have seen Iranian-supplied Houthi missiles and drones used against Yemeni, American, Saudi, and Emirati targets.

Plus, the combat use of a new Iranian weapon in the Yemeni theater will provide an important feedback loop to Tehran in further developing these 358 missiles, some of which are believed to have been used against U.S. dronesalready.

These new weapons also could come into the possession of other Iranian allies and proxies such as Hezbollah, which infamously used an Iranian anti-ship cruise missile to strike an Israeli warship in the Eastern Mediterranean in 2006.

The development, deployment, and proliferation of these new advanced arms—while Iran supposedly labors under an U.N. arms embargo that will soon expire—will serve only to increase the threat Iran and its allies and proxies pose to peace, security, and stability in the Middle East.

His article first appeared in The Daily Signal on February 25, 2020.

Image: Houthi Military Spokesman, Yahya Sarea, gives a statement during an exhibition of surface-to-air missiles in an unidentified location of Yemen, in this undated handout photo released by the Houthi Media Office on February 23, 2020. Houthi Media Office/Handout via REUTERS