Iran Knocked Out of the Sky a Very Special U.S. Drone (And Exposed a Key Weakness) 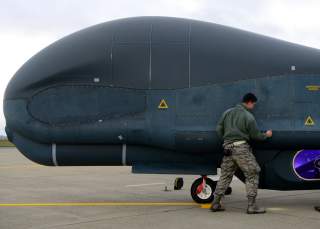 The shoot-down of a U.S. Navy surveillance drone on June 20, 2019 underscores a weakness in the Pentagon’s surveillance forces.

The Iranian Revolutionary Guard Corps claimed it shot down a “U.S.-made Global Hawk surveillance drone” flying in Iranian air space near the Strait of Hormuz.

U.S. Central Command clarified that the drone was a Navy Broad Area Maritime Surveillance Demonstrator, a prototype naval variant of the 737-size Global Hawk. BAMS-D carries cameras and a radar and is designed to swoop between high and low altitudes, alternately scanning wide areas for ships then individually identifying them.

Northrop built four BAMS-D drones starting in 2008. The Navy has stationed two of them in the United Arab Emirates for operational use as it prepares to deploy the full MQ-4C naval version of the Global Hawk starting in late 2019.

Not coincidentally, Lockheed Martin for years has been developing a new Mach-six penetrating spy drone it calls the SR-72, a reference to the long-retired SR-71. Lockheed has said little about the SR-72 since announcing the development effort back in 2013.

A Lockheed executive in 2018 hinted that a flyable SR-72 might already exist. Jack O'Banion, a Lockheed vice president, “made mysterious comments about the ultra-secret project at the American Institute of Aeronautics and Astronautics' annual SciTech Forum,” Business Insider reported.