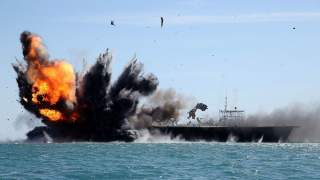 It appears the Iranian military might stage another mock attack on its huge model of a U.S. Navy aircraft carrier.

If so, the mock attack essentially would repeat a similar event from 2015 and could function as a show of force in the aftermath of the United States’ Jan. 2, 2020 assassination of Qasem Soleimani, the head of Iran’s Revolutionary Guard Corps.

Iran built the carrier mock-up on a barge. The fake flattop, which at roughly 1,000 feet is around the same length as an actual aircraft carrier, first appeared in photos in 2013.

Iranian forces assaulted the “aircraft carrier” during a naval war game in February 2015. “During the Great Prophet 9 exercises Iran targeted the vessel with a range of offensive equipment including swarms of fast attack craft, anti-ship missiles and ballistic missiles,” Offiziere reported.

Strikes were reportedly launched from both Bandar Abbas and Jask. Phase two of the exercise saw Iranian special forces fast-rope from helicopters onto the barge surface and attack the mock-up’s superstructure. A final wave included targeting by a suicide vessel and a coastal cruise missile.

“The whole show was an important propaganda piece demonstrating Iran’s anti-access/area denial strategy fitted to Iran’s unique operating space. “We are sending all the Persian Gulf countries a message of the might of the Islamic Republic of Iran — a message of security and peace in the Persian Gulf region and the Strait of Hormuz,” commented Mohammad Ali Jafari, commander of the Iran’s Revolutionary Guard Corps, the force responsible for security of the Strait.

In the event of war with the United States, Iran probably could block the narrow Strait of Hormuz that connects the Persian Gulf to the Indian Ocean. But it’s less clear that Tehran would want to close down the strait.

“Iran will ... be wary of the impact that closing the Strait of Hormuz could have on its relations with important economic partners, such as China,” Rockford Weitz, a Tufts University shipping expert, wrote in Navy Times. “It is estimated that 76 percent of crude oil passing through the waterway is destined for Asian markets, with China, India, Japan, South Korea and Singapore among the largest markets.”

The fake flattop more or less survived the 2015 war game. “Not surprisingly, Iran’s firepower failed to sink the barge, which is largely due to the way it was constructed,” Offiziere noted. “Historical satellite imagery from August 2013 shows that Iran built a hollow shell on a lattice structure—the latter similar to material used to build Iran’s offshore oil platforms. As a result, there was very little solid structure to actually strike and sink.”

Satellite photos that Defense One obtained in early 2020 appeared to depict the mock-up undergoing repairs. The barge could feature in a war game Iran is planning for March 2020, claimed Bryan Clark, a senior fellow at the Center for Strategic and Budgetary Assessments.

But Tehran could stage the exercise earlier than March 2020 in response to the killing of Soleimani, explained David Schmerler, senior research associate at the James Martin Center for Nonproliferation Studies.

The faux flattop “appears to have been loaded with mock aircraft on the flight deck in a near-identical arrangement to its previous configuration before the 2015 test,” Schmerler told Defense One. “It is hard to say if it is completely repaired, not being able to get images of anything below the deck, but the surface appears to be complete.”

The 2015 attack on the mock carrier didn’t overly faze the U.S. Navy.  “We are aware of a recent exercise by Iranian naval forces involving a mock-up of a vessel similar to an aircraft carrier,” Cmdr. Elissa Smith, a U.S. Defense Department spokeswoman, told The New York Times. “We are confident in our naval forces’ ability to defend themselves against any maritime threat.”

“It seems they’ve attempted to destroy the equivalent of a Hollywood movie set,” Cmdr. Kevin Stephens, the spokesman for the U.S. Fifth Fleet, based in Bahrain, told The Associated Press.