Iran Showed That U.S. Missile Defense Is Lacking: Here's How We Fix It 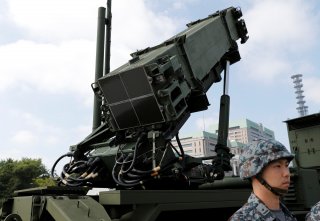 The January 7 Iranian missile attack against al-Asad air base in Iraq immediately led many to question why the base had no missile defenses in place.

The United States is now moving a Patriot battery to Al-Asad. Similarly, the U.S. sent Patriot and THAAD batteries to Saudi Arabia after the September 2019 cruise missile and UAV attacks on its oil facilities.

In these actions, the U.S. appears to be chasing the Iranian threat, one step behind. These linear and reactionary deployments are understandable for the short term, but, like a game of whack-a-mole, this approach will become unsustainable. Outpacing the threat requires smarter and more imaginative methods. As President Trump said last year, we need revolutionary rather than incremental improvements.

It is true that Iranian attacks reveal a vulnerability in U.S. forward deployments, and for now, deploying more Patriot, and THAAD batteries will help fill gaps. But the number of Patriot and THAAD batteries will always be limited. It’s unfeasible to deploy more interceptors to more unprotected locations ad infinitum. Moreover, to attempt to do so is to misunderstand the concept of operations behind regional missile defense. While missile defenses will always be finite, their presence can bolster regional deterrence by introducing doubt, thereby complicating an adversary’s decision-making.

Deployed missile defense batteries in a region force the adversary to account for defended targets when planning an attack. To achieve deterrence by denial, one need only do enough to convince an adversary that the odds of him achieving his desired outcome are too low relative to the cost and risk of launching a missile attack. If the adversary makes that calculation due to the presence of missile defenses, he will abandon or alter his attack plans, perhaps choosing a less lucrative target instead.

Choosing which assets to protect is a matter of policy, based on factors such as an assessment of where defenses would provide the most value. Establishing a missile defense force posture in one region often, by default, requires accepting a greater level of risk at undefended locations—e.g., al-Asad in January. In a world of finite resources, locating missile defense systems at every base and installation within a given region would prove cost-prohibitive and likely operationally infeasible.

Instead, at unprotected locations, the U.S. military typically relies on passive defense measures like shelter and early warning, while maintaining the option to conduct left-of-launch strikes (i.e., preemptive cyber, electronic, or even kinetic strikes) if intelligence indicates an impending attack. Even though interceptors were not deployed in Iraq, radars (which are part of the missile defense network) provided early warning, giving soldiers some time to prepare for the strikes.

As tension increased between the United States and Iran, perhaps a Patriot system should have been deployed at al-Asad. But if the Iranians knew that al-Asad was adequately protected, might they have just chosen a different unguarded target, instead? There will always be more assets we want to defend than missile defenses available. The real question, then, is how to achieve more with less.

The answer lies in increasing distributed missile defense operations. The Army’s new command and control network for missile defense, the Integrated Air and Missile Defense Battle Command System (IBCS), will serve as a necessary step to achieving this solution. Scheduled for initial use in 2022, IBCS will link all missile defense sensors and interceptors to one fire control center, as opposed to today’s more stove-piped approach in which each unit independently operates its co-located sensor and launcher. By permitting air and missile defenses to function as a joint kill web, rather than a linear kill chain, IBCS will be able to determine the best shooter to take down an incoming missile.

Such integration permits a commander to disperse each missile defense system's various sensors, shooter, and fire control elements without loss of capability. For example, instead of having to move an entire Patriot battery or battalion from place to place within a region, a regional commander can separate launchers or sensors from the battery and distribute them more freely. Such flexibility expands the defended area, introduces doubt about where defenses are located, and further complicates an adversary’s decision-making.

Other steps toward more flexible operations include THAAD remote launch. If a THAAD unit can remotely fire an interceptor, then a commander does not have to cluster THAAD interceptors near its radar or control system, and can instead locate the interceptors elsewhere to expand the defended area.

The Army also plans to incorporate a Patriot battery’s PAC-3 MSE launchers into THAAD units. This would further improve the ability to spread out launchers and expand shooter coverage in a region.

To meet the increasingly complex air and missile threat, acquiring more missile defense batteries for both the United States and its partners would certainly be a welcome step. But improving capacity alone is not a sustainable nor a cost-effective solution. Instead, improved integration, distributed deployments, and flexible concepts of operation will lead to real success in revolutionizing air and missile defense capabilities.