Iran: Still a State-Sponsor of Terrorism, and Growing Bolder 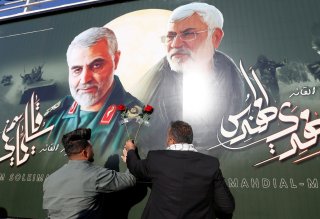 In his Senate confirmation hearing, Secretary of State Antony Blinken affirmed his view of Iran as the largest state sponsor of terrorism, a distinction long recognized by American administrations of both parties. Indeed, Iran’s culpability in sowing sectarian chaos and conflict in its fractured neighborhood was recently highlighted by its own terrorist proxies and clients, from Hezbollah to Hamas. As a new administration seeks to make diplomatic headway with Tehran, it must also grapple with the regime’s relentless commitment to providing funds, weapons, and training to extremists across the Middle East.

Iran backs a diverse array of actors that use violence to stoke instability, allowing Tehran to increase its own influence. As a revisionist, revolutionary power, it maintains a stridently anti-Western and anti-American mission. The regime undermines U.S. interests by challenging freedom of navigation in the Persian Gulf, threatening the sovereignty of surrounding countries, and sponsoring terrorism both in the region and abroad. It is also openly dedicated to the annihilation of Israel. “We will support and assist any nation or any group anywhere who opposes and fights the Zionist regime,” Iran’s supreme leader bluntly pledged last May.

Iran spends significant resources in pursuit of these objectives. It provided its most powerful proxy group, Hezbollah, with an estimated $700 million annually in recent years, according to U.S. sources—though this funding has diminished since Washington reimposed powerful sanctions on Tehran in 2018 after the United States withdrew from the 2015 nuclear deal. Iran also helped Hezbollah amass an arsenal of some 120,000-140,000 rockets and missiles, including over a hundred long-range precision missiles, as detailed in a 2018 report by JINSA’s Hybrid Warfare Policy Project. In December, Hezbollah chief Hassan Nasrallah claimed that the group’s arsenal of precision missiles had doubled since the previous year. “Any target across the area of occupied Palestine that we want to hit accurately—we are able to hit accurately,” he boasted.

Hezbollah has long worked with Iran to acquire precision munitions, which pose a distinctly greater threat than their unguided counterparts. They can be used to more accurately target critical infrastructure, like a power grid, desalinization plant, or airport, in order to weaken an opponent’s capabilities or create mass casualties. Nasrallah himself warned in 2016 that a strike on ammonia storage tanks in northern Israel would inflict damage similar to a nuclear weapon.

Iranian officials have openly claimed credit for Hezbollah’s arms buildup. “All the missile capabilities of Gaza and Lebanon have been supported by Iran, and they are the front line for confrontation,” a top Iranian commander said recently.

In December, Israel ordered the seizure of $4 million it said was sent from Iran to Hamas, allegedly to pay terrorists and manufacture arms. Days later, Hamas co-founder Mahmoud al-Zahar recounted receiving $22 million in suitcases following his first meeting with Iranian Gen. Qassem Soleimani, who was killed by a U.S. airstrike last year.

Iran’s sectarian influence is also felt in Iraq, where Tehran has provided funds, weapons, ammunition, and training to Shiite militias that have targeted U.S. and coalition troops focused on combating ISIS. These militiamen have been accused of carrying out abuses against Sunni Iraqis, including killings, torture, and arbitrary detentions. Thousands deployed to Syria at Iran’s behest to support the brutal regime of President Bashar al-Assad.

Iran has additionally sent arms to Houthi rebels in Yemen and the Taliban in Afghanistan, and maintains a complex relationship with Al Qaeda, whose second-in-command was reportedly assassinated in August by Israeli operatives in Tehran, where he was living freely.

Notably, Iran’s bankrolling of terrorism was hampered by the Trump administration’s “maximum pressure” campaign, with Iran's president saying in September that the country lost $150 billion in revenue since 2018. According to reports, Hezbollah experienced “a sharp fall in its revenue,” while funding to Shiite militias in Iraq was "dramatically disrupted" amid sanctions and the coronavirus pandemic.

President Joe Biden’s team is expected to take a different approach, having made clear their intent to pursue diplomacy with Tehran, which is reportedly already underway. This approach also includes the possibility of sanctions relief. Yet with increased resources, Iran could divert more funds to terrorist groups. That would be an odious outcome, one that the new administration must take into account in its determination to pursue negotiations. Iran should not be further empowered to sow terror and destabilize the Middle East.

Retired Marine Lt. Gen. Richard Natonski served as head of U.S. Marine Corps Forces Command and is a former observer to U.N. peacekeeping operations in the Middle East. He is also a member of the Jewish Institute for National Security of America’s (JINSA) Board of Advisors and Hybrid Warfare Policy Project.