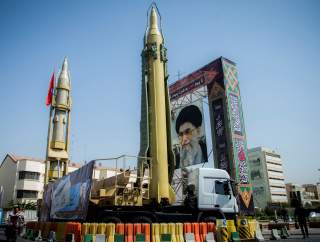 Iran does test medium-range ballistic missiles, although not commonly.

For the first time since a standoff between the United States and Iran escalated into attacks on oil tankers, Iran has conducted a medium-range ballistic missile test. According to U.S. officials, Iran test-fired a Shahab-3 medium-range ballistic missile earlier this week that traveled 1,000 kilometers (621 miles) — distance enough to hit Saudi Arabia and come close to Israel.

Iran's strategy in carrying out the test is likely twofold. For one, Tehran is engaging in a show of force against the United States as part of the aggressive regional strategy it has pursued over the last three months. At the same time, the launches provide Iran's engineers and missile designers an important opportunity to test technical and operational designs as part of the country's wider ballistic missile program.

Iran does test medium-range ballistic missiles, although not commonly. Since U.S. President Donald Trump took office in January 2017, Iran has conducted seven tests of either the Shahab-3 or the more advanced Khorramshahr ballistic missile. This week's test, however, is the first since December 2018. In doing so, Tehran is putting on a show of force with ballistic missiles for Washington, which recently announced it would deploy U.S. forces to Saudi Arabia for the first time since 2003. Those forces will be stationed at the Prince Sultan Air Base outside of Riyadh — which would put them outside the range of Iranian short-range ballistic missiles, but not the medium-range ones like the one Iran just tested. Moreover, in the event of a military escalation between Iran and the United States or its regional allies, Tehran would want to ensure its arsenal's capabilities are up to scratch.

The United States will inevitably decry the test as a violation of U.N. Security Council Resolution 2231, which bars Iran from testing any ballistic missiles that could deliver a nuclear warhead. Whether this week's tests constitute a violation of the resolution is a matter of interpretation, but Washington will hope to use it to pressure European powers to take a harder line on Tehran. After Iran's previous missile test in December 2018 and two failed satellite launches in January and February — which Iran's critics depicted as a cover for developing long-range ballistic missiles — the European Union considered placing sanctions on Iran's ballistic missile program, but ultimately failed to come to a consensus. In the end, Iran's decision to continue acting provocatively is designed to show the world that a war with the Islamic republic would wreak catastrophic damage on the region. And while the European Union could still back limited targeted sanctions on Iran's ballistic missile program itself, the bloc will tread lightly in an effort to prevent further escalation — particularly as its concerns remain fixated on shipping in the Persian Gulf.

Conducting missile tests like these greatly benefits Iran in terms of accuracy, reliability and range. It's not yet clear which variant of the Shahab-3 Iran used in the most recent missile test, but over the past five years, it has begun deploying the line's Emad missile, which has a fuselage composed of aluminum instead of steel, boasts an upgraded navigation/guidance system and features reentry vehicle designed to be more successful in avoiding anti-ballistic missile systems — all things Iran would want to attain in the event of a regional military confrontation. Indeed, the mere fact that Iran tested the Shahab-3 instead of the more advanced and longer-range Khorramshahr ballistic missile suggests that there was a technical and developmental reason for Tehran's choice, especially as it knows the latter system would irritate Washington more.

Iran also unveiled several new missiles in February to celebrate the 40th anniversary of the Islamic Revolution. The Islamic Revolutionary Guards Corps (IRGC) unveiled what it claims to be a second-generation Khorramshahr missile (Khorramshahr-2), a new solid-fueled ballistic missile, the Dezful, which also has a range of about 1,000 kilometers, and an upgraded cruise missile. It's unclear how far along — if at all — the new missiles are in development. Whatever the case, satellite imagery from an Iranian facility earlier this month shows that Iran has been testing solid-fueled rocket boosters, a key area of research for the IRGC's aerospace force. Given such developments, more provocative missile tests are likely on the way.

Iran: Tehran Flexes Its Muscles With a Missile Test is republished with the permission of Stratfor Worldview, a geopolitical intelligence and advisory firm.