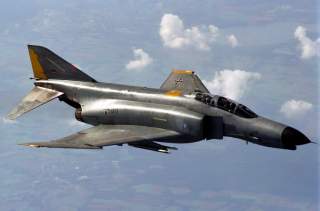 On Aug. 4, 2019, around 12:30 hrs local time, the F-4E Phantom II inventory of the Islamic Republic of Iran Air Force (IRIAF) became a little smaller after a 61st TFS F-4E crashed near Tangestan beach, north-west of home base 6th Tactical Air Base Bushehr (Iran).

Luckily both crew members managed to eject in time and parachuted safely to mother Earth.

Their unfortunate Phantom crashed into the Persian Gulf. Regular patrol flights of F-4Es are common in the region, but this crash comes amid tensions in the Gulf region between the US and Iran.

Earlier, on Aug. 4, Iran announced it had captured a foreign oil tanker, which, according to their statement, was smuggling fuel to an unnamed Arab state in the region. Possibly, the F-4E was involved in a top cover mission when things went wrong. A spokesman of the IRIAF said the crew of the crashed F-4E reported technical issues before they ejected.

A careful assessment of Scramble Facebook News Magazine is that the whole IRIAF possibly still operates some 40 to 45 F-4Es, of which some ten are operated by the 61st TFS. Besides Bushehr, these magnificent aircraft are operated from Bandar Abbas air base (3rd TAB, 91st TFS) and Hamadan air base (9th TAB, 31st TFS).

Today the Vietnam War era F-4E Phantom II fighter jet is still the backbone of IRIAF and is tasked to perform a number of roles for the Islamic Republic’s defence. With Iran relying heavily on its F-14 and MiG-29 fleets and surface to air missiles batteries to protect its airspace from enemy aircraft the Phantoms in Iranian service have increasingly been allocated a strike role. This includes both conventional strikes on ground targets, as demonstrated by operations against Islamic State militants based in Iraq, as well as ship hunting missions in the Persian Gulf.