Iran's Drone Shootdown Shows We're Vulnerable For the Next War 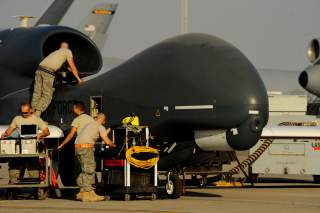 The shoot-down of a U.S. Navy surveillance drone on June 20, 2019 underscores a weakness in the Pentagon’s surveillance forces.

The Iranian Revolutionary Guard Corps claimed it shot down a “U.S.-made Global Hawk surveillance drone” flying in Iranian air space near the Strait of Hormuz.

U.S. Central Command clarified that the drone was a Navy Broad Area Maritime Surveillance Demonstrator, a prototype naval variant of the 737-size Global Hawk. BAMS-D carries cameras and a radar and is designed to swoop between high and low altitudes, alternately scanning wide areas for ships then individually identifying them.

Northrop built four BAMS-D drones starting in 2008. The Navy has stationed two of them in the United Arab Emirates for operational use as it prepares to deploy the full MQ-4C naval version of the Global Hawk starting in late 2019.

Not coincidentally, Lockheed Martin for years has been developing a new Mach-six penetrating spy drone it calls the SR-72, a reference to the long-retired SR-71. Lockheed has said little about the SR-72 since announcing the development effort back in 2013.

A Lockheed executive in 2018 hinted that a flyable SR-72 might already exist. Jack O'Banion, a Lockheed vice president, “made mysterious comments about the ultra-secret project at the American Institute of Aeronautics and Astronautics' annual SciTech Forum,” Business Insider reported.

His article was first published in June 2019. It is being republished due to reader interest.