Iran's Fake Election Can Only Have One WInner 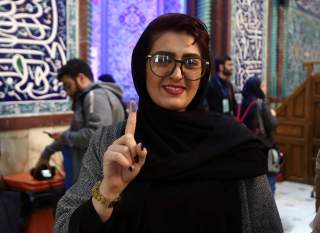 Iran is preparing for another set of rigged parliamentary elections Friday.

Once again, Iran’s clerical regime has vetoed the candidacies of almost half of the 14,000 would-be office-seekers who registered to run for one of the 290 seats.

The Guardian Council, which must approve candidates, disqualified a record number of them, including a majority of reformists who threaten the entrenched power of Iran’s ruling hard-liners.

The purge left reformists with no candidates eligible to run for 230 of the 290 seats in the Majlis, Iran’s parliament.

The Guardian Council even disqualified 90 current members of the Majlis and barred them from running for reelection.

President Hassan Rouhani, a pragmatic leader who has been undermined by ultra-hard-liners surrounding the supreme leader, Ayatollah Ali Khamenei, criticized the Guardian Council, saying: “This is not an election. It’s an appointment.”

As Iranian journalist Amir Taheri has noted, Iran is the only country in the world—with the possible exception of Zimbabwe—that is poorer than it was 40 years ago.

Although U.S. sanctions have hurt Iran’s economy in recent years, Iran’s economic problems are largely attributable to the economic mismanagement, widespread corruption, and expensive efforts to export Iran’s revolution and build a massive proxy terrorist network under the hard-line Islamist extremists who have dominated Iran since the 1979 revolution.

In November, Iran was shaken by another wave of popular protests against the repressive and increasingly unpopular clerical regime. Spontaneous demonstrations against a fuel price hike escalated rapidly into widespread unrest and calls for the ouster of the regime, before they were brutally repressed.

Rouhani has become increasingly isolated. He has been criticized by many reformists for failing to deliver on pledges to reform Iran’s economy and ease social and political restrictions. He also has raised the ire of hard-liners, who opposed the nuclear agreement negotiated with the Obama administration, as well as his efforts to trim the powers of Iran’s Revolutionary Guards.

The Revolutionary Guards, charged with protecting and expanding Iran’s Islamic Revolution, have become increasingly assertive in carving out their own empire within Iran’s economic, political, military, and foreign policy spheres.

Since they report directly to Khamenei, not Iran’s president, they prioritize the narrow interests of Iran’s Islamist revolutionary elite over the broader national interests represented by the Iranian state.

Their numbers are likely to increase in the new Majlis, because they are more likely than reformists or independents to gain the approval of the Guardian Council.

Moreover, many reformists are calling for a boycott of the elections, which are designed to favor the clerical regime’s strongest supporters. Reformists have concluded that as long as the Guardian Council blocks their candidates and vetoes their legislation, reform through parliamentary action is impossible.

Instead, an influx of new hard-line members of parliament could reinforce the position of Khamenei  and his hard-line inner circle, while greatly complicating Rouhani’s final year in office.

In contrast to Iran’s disillusioned reformists, hard-liners have appealed to their supporters to vote. Khamenei has gone so far as to declare voting to be a “religious duty” and seeks to bolster the perceived legitimacy of Iran’s increasingly repressive political system by hailing the election as a vote of confidence in the regime.

But using voter turnout as a litmus test for legitimacy could backfire if the turnout falls below the 62% turnout in the 2016 parliamentary election or the 66% turnout in 2012.

Lower turnout, however, could accelerate the Revolutionary Guards slow-motion coup against the state.

The Revolutionary Guards already have made major inroads in penetrating Iran’s construction industry, oil sector, and port operations, as well as the military, intelligence, and internal security operations of the regime.

The rigged elections are likely to further enhance their influence within the Majlis.

Such an outcome will reinforce the conclusion of many Iranians that the only vote that matters is that of Khamenei, who has absolute veto power over all major issues.

James Phillips is the senior research fellow for Middle Eastern affairs at the Douglas and Sarah Allison Center for Foreign Policy Studies at The Heritage Foundation. He has written extensively on Middle Eastern issues and international terrorism since 1978. Read his research.

His article first appeared in The Daily Signal on February 20.

Image: A woman shows her ink-stained finger after she casted her vote during parliamentary elections at a polling station in Tehran, Iran February 21, 2020. Nazanin Tabatabaee/WANA (West Asia News Agency) via REUTERS