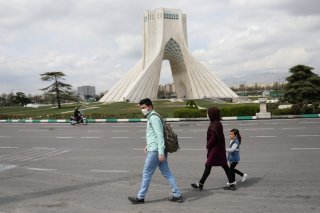 The embrace of coronavirus conspiracy theories by Iran’s Islamist regime in recent days has exposed the cynicism and desperation of a beleaguered dictatorship focused on retaining power while sacrificing the health of its own people.

The Iranian regime has accused the United States of being behind the coronavirus outbreak, to shift blame for the questionable priorities and the utter incompetency of its own belated and ineffective response to the COVID-19 pandemic.

By blaming the “usual suspects”—the regime’s traditional enemies—Iran’s rulers hope to minimize the domestic political backlash over their  disastrous response to the pandemic, which has generated close to 32,000 cases of COVID-19 and over 2,300 deaths in Iran.

Since Iran’s 1979 revolution, the regime has used disinformation, propaganda, and conspiracy theories as tools to sustain its Islamist ideology and maintain its grip on power.

Iran’s state-run media control the narrative at home through censorship and dissemination of selective content, while international messaging is carefully calibrated to promote the regime’s ideology.

The crux of the argument is that Iran has been fighting the “Zionist Jews” and the “Great Satan” of the United States in an ideological battle of good versus evil.

The coronavirus crisis is just another front in the regime’s ideological war.  But it has become an increasingly important front as Iran’s rulers attempt to repair the regime’s image and bolster its damaged legitimacy at a time of widespread domestic distrust, surging opposition, and declining popular support.

After weeks of silence and mounting pressure to address the crisis publicly, Iran’s supreme leader, Ayatollah Ali Khamenei, addressed the nation in a televised speech March 22.

Instead of reflecting on the crisis and discussing steps to combat the new coronavirus, Khamenei accused the U.S. of creating the virus as a biological weapon, “produced specifically for Iran, using knowledge about Iranian genetics that was acquired in various ways.”

Khamenei also rejected a U.S. offer of aid in fighting the pandemic, saying that any medicine provided by the U.S. might spread the virus further.

Iran’s Islamic Revolutionary Guard Corps has assumed a leading role in propagating conspiracy theories about the pandemic. Gen. Hossein Salami, commander of the Revolutionary Guard, warned that the virus “may be the product of the American biological invasion, which it first spread to China and then to Iran and the rest of the world.”

The Revolutionary Guard’s cyber division has posted an online video of Khamenei’s speech blaming America for the coronavirus outbreak, along with two videos of “experts” asserting that American and Israeli spies have used “demons” in their intelligence operations against Iran.

News outlets linked to the Revolutionary Guard and pro-regime “experts” have pointed fingers at the United States and other enemies such as Israel since the beginning of March, when COVID-19 cases began to surge because the regime failed to enact effective containment measures.

Dr. Ali Karami, a lecturer of medicine at a Revolutionary Guard-affiliated university, claimed that America had engineered a virus to develop “ethnic weapons” that specifically targeted Iranians.

Karami claimed without evidence that America did this by using DNA data gathered through the Iranian Genome Project at Stanford University, which he asserted was financed by Baha’is, a religious minority persecuted in Iran.

This nonsensical explanation fails to account for the high rate of confirmed COVID-19 cases worldwide, but is a useful tactic to shift the focus away from the Iranian regime’s mishandling of the outbreak.

These false accusations come after days of Chinese disinformation campaignsthat have tried to rewrite the narrative on the coronavirus.

China’s Foreign Ministry spokesman, Lijian Zhao, suggested that the U.S. military had brought the coronavirus to Wuhan, the capital of Hubei province. Zhao charged that the outbreak in Wuhan followed the visit of 300 athletes from the U.S. Army and called for the United States to reveal the identity of patient zero.

This is something that even the Chinese ambassador to the United States, Cui Tiankai, called “absolutely crazy” in an interview with CBS News’ “Face the Nation.”

Like Iran, China has been effective in controlling information provided by domestic media while projecting “smart power” externally in the information space. International news reporting is heavily censored, and journalists are monitored and restricted in their movement and speech by the Chinese communist regime.

Back in February, China expelled three journalists working for The Wall Street Journal because of a critical piece on China’s mishandling of the coronavirus outbreak, a punitive action that the regime had not taken against foreign reporters since 1998. Beijing later doubled down and expelled reporters representing two other U.S. newspapers.

The Chinese government’s tight control over the flow of information suggests that the free flow of anti-American conspiracy theories on Chinese social media is at least tolerated, if not encouraged, by the regime to advance its own interests.

Both Iran and China seem to have adopted the Soviet-style propaganda tacticsthat Vladimir Putin’s Russia continues to exploit for the COVID-19 pandemic.

Secretary of State Mike Pompeo forcefully rejected Chinese and Iranian conspiracy theories in a press statement Monday, saying that “fabrications that the U.S. is responsible for the Wuhan Virus put Iranians, Americans, and the rest of the world at risk.”

Even so, tensions will remain as China attempts to retake control of the narrative on the crisis and both Beijing and Tehran seek a scapegoat for their own coronavirus outbreaks.

Iran’s government has warned of a second wave of infections after Iranians continued to travel during the Iranian New Year holiday last Friday. While the regime looks at imposing new travel restrictions to curb the outbreak, former health ministers are urging the government to limit inter-city travel and close nonessential businesses.

Iran’s dictatorship has refused foreign aid offered by the United States, the World Health Organization, and other international health groups on grounds that foreign humanitarian aid workers could be “spies.”

The Iranian regime apparently will do anything it can to maintain its grip on power, even if it means needlessly sacrificing Iranian lives.

James Phillips is the senior research fellow for Middle Eastern affairs at the Douglas and Sarah Allison Center for Foreign Policy Studies at The Heritage Foundation. He has written extensively on Middle Eastern issues and international terrorism since 1978. Read his research.

Nicole Robinson is a research assistant in the Allison Center for Foreign Policy at The Heritage Foundation.

Their article first appeared in The Daily Signal on March 27.