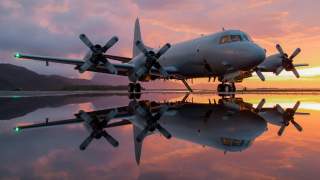 Navy photos depict the unarmed, four-engine P-3 flying near Alan Shepard and Normandy while the vessels transited the Gulf of Oman, a narrow chokepoint between the Persian Gulf and the Indian Ocean.

The Iranians instead have focused on maintaining and upgrading Western- and Soviet-sourced weaponry that for the most part pre-dates the 1979 Islamic revolution in the country.

At least when it comes to the P-3s, the maintenance efforts appear to be working. Iran bought six P-3Fs from Lockheed starting in 1973. The P-3 at the time arguably was the world’s leading maritime patrol plane. Its high speed and superb low-level handling allowed it to effectively hunt surface ships and submarines.

One of Iran’s P-3s, serial 5-8702, crashed in February 1985, according to Scramble, a Dutch aviation magazine. Another P-3F reportedly also was written-off in 1985, ostensibly leaving the IRIAF with just four of the patrollers.

But Scramble has found evidence of five P-3s remaining in the Iranian inventory. “So we believe there was no second write-off in 1985,” the magazine noted. “There might have been an incident, but the aircraft must have been repaired.”

Those dates aren’t the only times the P-3s have appeared in photographs or commercial satellite imagery. They’re just the most recent occasions when the planes’ serial numbers clearly have been visible, confirming their precise identity.

There are five P-3Fs. But Scramble asserted that just two, and possibly three, still are operational, typically flying from the IRIAF base at Shiraz. “Two aircraft are used as spare parts or are rotated through a maintenance program,” the magazine explained.

Since June 2009, we see three, but in most cases two Orions parked at Shiraz. Clearly visible in 2013, the IRIAF encountered problems with their Orions, as between late March 2013 and late January 2014, two aircraft were seen outside at exact the same position.

We therefore assume that both aircraft were not operational/stored. Clearly both aircraft did not move throughout this period! In May 2014, we see some changes as a third Orion arrived at Shiraz. This aircraft was clearly repainted as it had a high-contrast color scheme compared to the other two aircraft that were stored throughout 2013 and early 2014 ... This aircraft must have been overhauled, most probably at Mehrabad.

Going back to P-3F next to the 71st ASW Squadron hanger. We assume this aircraft was cannibalized through the years (we can see the lack of engines, propellers, outboard ailerons and [magnetic-detector] boom). Strikingly, on the image from Aug. 31, 2019, it is clearly seen that this aircraft was on rebuild. Ailerons were attached again, but it still lacks propellers.

Nearly 50 years is a long time for a warplane to fly, especially when so many of its flights are over the ocean with its corrosive salt spray.

But the U.S. military routinely operates aircraft into their fifth decade or even longer. Given its lack of alternatives, Iran certainly will endeavor to keep its precious patrol planes flying for years or even decades to come.