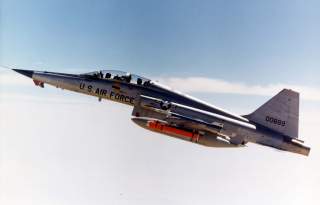 Rouhani called on the Iranian military to strengthen their readiness in the face of enemy threats in a speech during Tuesday’s defense show.
Iran says its new Kowsar fighter jet has flown. President Hassan Rouhani was on scene to see the jet – which is a carbon copy of the American F-5F – undergoing flight trials.

Test flights of the Kowsar, took place on Aug. 21, 2018 on the eve of the National Day of the Defense Industry, according to semi-official Mehr News Agency. It was unclear whether the jet’s first public display flight has yet taken place.

The Kowsar can be used for “short aerial support missions” and is equipped with systems that “promote precision targeting,” according to state media.

Rouhani called on the Iranian military to strengthen their readiness in the face of enemy threats in a speech during Tuesday’s defense show.

“When we say we are ready for defense, it means that we seek the establishment of sustainable peace,” Rouhani said.

He called for “the discipline, education, faith, motivation, weapons and readiness of our Armed Forces (to) reach a level that no one would dare to attack us,” adding, “Why does the US not attack us? Because it is aware of our power and the cost [that it will entail].”

Iran is currently under economic and diplomatic pressure from a raft of sanctions reimposed by the U.S. earlier this month, and the unveiling could be seen as a bid to show self-sufficiency and military might in the face of that pressure.

The announcement was made at the start of the Muslim holiday of Eid al-Adha, when many Iranians would be at home and more likely to be watching television, CNN reported.

Noteworthy in 2013, Iran unveiled the Qaher-313 (F-313), a stealth fighter jet that the country compared to the U.S. F-22 and F-35. But skepticism remains regarding the design and quality of the build of that plane.

Iran has sent weapons and soldiers to Syria during the country’s seven-year civil war in support of Syrian President Bashar al-Assad.

However as we have already explained the Islamic Republic of Iran Air Force (IRIAF)comprises roughly a few dozen strike aircraft, largely Russian or American planes acquired before the 1979 revolution.