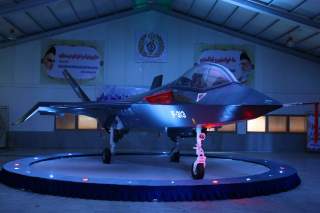 For a hearty laugh, look no further than the video that Iran’s Revolutionary Guard Corps Air Force released in early November purporting to show a flying copy of the American RQ-170 stealth drone that crashed in the country back in 2011.

The video and stills of the copycat craft are pretty sketchy. Aviation analysts and have pored over the release looking for clues that the Guard Corps is bluffing—and there are plenty.

The truth about Iran’s pursuit of an RQ-170 clone and other radar-evading stealth technology lies not in the video, but elsewhere. Tehran’s budget, its actual defense capabilities and its espionage efforts all point to the same truth—that the country is faking it.

Drone or not, Iran’s isn’t in the stealth business at all … and won’t be for a great while.

“Any actual national pursuit of a vehicle in the class of the RQ-170—rather than the production simply of the same shape in mock-up for propaganda — would seem to be a costly waste of resource,” says Douglas Barrie, a fellow at the International Institute for Strategic Studies.

It’s not as though the Iranians are completely without defense manufacturing or reverse-engineering skills. As Barrie points out, they’ve been able to maintain a fleet of aging Russian and Shah-vintage American fighter aircraft, crank out a number of tactical drones and assemble Chinese anti-ship missiles.

“This does not, however, immediately lead to the assumption that it has the R&D and manufacturing capacity to comparatively quickly reproduce a low-observable platform with a performance related remotely to the original in terms of signature management,” Barrie cautions.

“The flight control system software required for a tailless flying wing is also demanding,” he adds. “In neither of these areas does Iran have a developmental track record that would give confidence that it was capable of producing anything akin to the RQ-170.”

For evidence, look no further than the many other purportedly stealth Iranian aircraft—which tend to appear only in press releases and edited videos.

As early as 1984, only a year after the United States introduced the F-117 as the world’s first stealth aircraft, Iran’s Jomhouri e Islami newspaper was touting the Guards’ stealth “me-too” claims. The country had built a twin-seat, seven-meter wingspan plane.

“An important feature of the aircraft is that it is invisible to radar,” the paper claimed.

The invisible-to-radar plane never materialized. Nor have any other of its purported successors. Iran has been teasing the Shafaq, a jet with a hoped-for radar-absorbent coating, since 2001—but by all outward appearances, the program is stagnant.

More recently, Iran tried to pass off a cheap scale model as the F-313 “stealth” fighter, complete with a cockpit seemingly incapable of fitting a human pilot.

Sometimes, Tehran’s propagandists dispense with the pretense of fashioning sleek, flying wing-shaped models and simply abuse the meaning of the word “stealth.” Such was the case with the roll-out of the Hamaseh, a run-of-the-mill tactical drone with enough right angles and surfaces to make a radar screen light up like a Christmas tree.

Aside from the absence of demonstrated skills for the reverse-engineering and production of stealth aircraft, Iran simply doesn’t have the money for it.

Thanks to a global sanctions regime and relatively low recent oil prices, Tehran’s defense budget is a pittance—roughly $10 billion year.

That’s especially meager compared to what countries that are active in stealth tech routinely spend. Stealth technology is incredibly expensive to research, implement and maintain.

And so it’s no surprise that the world’s three largest defense spenders—the U.S., Russia and China—also happen to be the world’s only three countries known to develop radar-evading aircraft. Russia, which has the smallest military budget of the three, spends eight times more than Iran does on weaponry.

It’s instructive to compare China and Iran’s respective histories of illicit, ahem, procurement efforts. The Chinese have made a sustained, intensive—and successful effort—to obtain, copy and implement American stealth technology … and it shows in the list of spies who got caught trying to export it.

In just the past few years, authorities have apprehended China’s agents trying to buy stealth secrets from a defense contractor—and even propositioning undercover FBI agents to steal secrets for them.

Iran’s illicit procurement in the United States, however, indicates no evidence of any interest on Tehran’s part in obtaining stealth designs. Rather, Iranian agents seek more pressing technologies—ones that are relevant to Iran’s immediate military needs.

For those who still doubt Iran’s stealth capabilities, the most recent video of its purported RQ-170 clone only adds to the skepticism. Much like when the Guards tried to pass off a scaled-down model of the F-313 as a functional aircraft, Iran’s drone-makers appear to have substituted a small model for a full-size RQ-170 clone.

Footage of the supposed clone’s flight, broadcast on state-run TV in Iran, shows an aircraft that seems much smaller than the real RQ-170, which has a 20-meter wingspan. The size discrepancy is especially obvious when you compare the drone to surrounding objects.

The video’s sound effects also don’t exactly inspire confidence in its authenticity. For some reason, Iran’s propaganda hacks felt the need to add loud and clumsy “zoom” sounds every time the drone flies past in the domestically broadcast video.

The strange thing about Iran’s penchant for stealth braggadocio in the face of crippling limitations is how unnecessary it all seems, at least to outsiders.

Iranian special forces were able to sow chaos in Iraq during the American occupation. Tehran’s proxies in the Lebanese militant group Hezbollah are among the world’s most skilled terrorists.

And Iranians have also been playing the role of counterinsurgents, helping the Iraqi government fight Islamic State and the Syrian government brutally suppress the uprising against Bashar Al Assad’s regime.

Despite its martial prowess, Iran’s insistence on pretending its weapons are in the same league as major military powers only ends up making the country look like foolish to an international audience.

Why carry on with the farce? “The value of claiming to have the ability to develop an RQ-170 clone is likely one of domestic propaganda,” Barrie says.

Back home in Iran, authorities try to keep a tight lid on access to the kinds of skeptical international media that will throw a challenge flag on stunts like this.

Many ordinary Iranians will buy the stealth claims simply because they haven’t seen anything that would lead them to believe otherwise. More importantly to Iran’s military and religious rulers, they’ll believe the propaganda that Iran’s behavior—and the sanctions they bring—haven’t isolated the country and brought ruin to its economy.

So laugh at Iran’s rinky-dink RQ-170 toy if you must—it’s pretty hard not to. As long as everyday Iranians can’t hear you, the Guard Corps doesn’t care.