ISIS' DIY Tanks: A Killer or a Joke? You Decide. 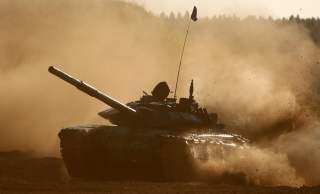 But a surprising source of do-it-yourself armor has been Islamic State. ISIS has modified its arsenal of captured, mostly Soviet- and Russian-made armor to create some bizarre vehicles. The Oryx Blog, run by two Dutch military analysts, has put together a fascinating collection of information and photos of these homebrew vehicles.

In Syria, ISIS created two workshops at Raqqa and Deir al-Zour. Among the handiwork of the Deir al-Zour group were BMP-1 infantry fighting vehicles with their turrets replaced by a rapid-fire ZU-23 antiaircraft gun (which presumably was deemed more useful than the BMP-1’s original seventy-three-millimeter cannon and Sagger antitank missile launcher). The thinly armored BMPs were also up-armored with sheet metal and slat armor (that looks like metal chain-link fencing) on the hull, and side skirts protecting the treads. Yet the BMP’s turret didn’t go to waste: some were mounted on the back of Toyota Land Cruisers.

ISIS armorers also modified T-55 and T-62 tanks with homemade armor. And, in one case, very homemade: the Oryx Blog points to a photo of a T-62 with a frame that apparently braces some sort of foam armor. “Certainly a curious choice for increasing your armor protection,” the blog adds.

“Another less sophisticated solution that has been quite popular among factions in Syria consists of installing spent shell casings around the turret,” which in one photo “appears to be held together by rope,” the blog explains. “The side skirts have been reinforced by metal or steel plates, as is the lower glacis plate. Although only contributing to a small part of the tank’s armor and relatively hard to hit, the lower glacis plate is often overlooked during DIY armor upgrades.”

ISIS has also converted trucks into weapons platforms. A notable example is a three-ton 122-millimeter D-30 howitzer mounted on a flatbed.

The Raqqa workshop worked on captured T-72 tanks, including rearranging the Kontakt explosive-armor blocks on the vehicles. That ISIS may not have fully understood what they were dealing with is seen a photo of explosive-armor blocks placed on a T-72’s rear mudguards, “which serves little to no purpose in terms of increased protection and could instead have been placed on real weak spots, of which the T-72 knows all too many,” the blog points out.

ISIS also attempted to camouflage its vehicles from coalition and Russian aircraft. ISIS fitted camouflage uniforms “with an aluminum lining to prevent looking infrared (FLIR) targeting pods from picking up the heat source of the soldier,” according to the Oryx Blog. It tried the same trick with tanks, draping them with shaggy leather strips to mask their heat signature. “As no tank upgraded with this type of camouflage has ever been featured being targeted in footage of Coalition airstrikes, or has been seen destroyed by a presumed airstrike on the ground in Syria, it could indeed have proved effective at deceiving Coalition aircraft and thus avoiding detection,” the blog says.

That such ingenuity was wasted on such a vile cause is a tragedy. So is the futility, now that ISIS is being hemmed in and squashed by coalition and Syrian/Hezbollah/Russian ground troops and aircraft. ISIS may survive as an insurgent movement, but the glory days of its DIY armor fleet are fading.

Michael Peck is a contributing writer for the National Interest. He can be found on Twitter and Facebook. This piece was originally featured in September 2017 and is being republished due to reader's interest.