Islamic State Wants You to Fear Its Snipers 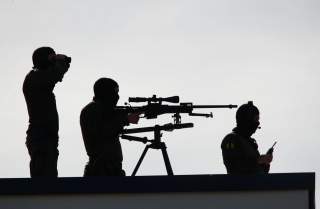 Snipers stalk the sprawling battlefields of Iraq and Syria. Hiding, quietly waiting and squeezing off long-distance kill-shots at unsuspecting human targets, sharpshooters on all sides of the Syrian civil conflict and the war on Islamic State have a greater impact on the fighting’s outcome than their small numbers imply.

For in addition to precisely, selectively killing front-line fighters and leaders, sharpshooters wield disproportionate deterrent value. They’re scary — even rumors of nearby enemy snipers can grind combat operations to a halt.

ISIS seizes every opportunity to churn out propaganda. Snipers with their terrible, bloody mystique are perhaps the perfect subject for militant hagiographers. The terror group has released multiple videos promoting its sniper brigades and has posted photos of the snipers on social media pages.

The Islamic State snipers in Picking Heads appear to have limited training and rely on a random assortment of equipment. In other words, aside from the slick production ISIS is known for, the videos show exactly what you’d expect from a group of militants waging unconventional warfare.

They’re making do with whatever they can get their hands on. But if the video is any indicator, Islamic State snipers are a formidable lot despite their limitations.

As ISIS swept through Iraq and Syria in 2014, militant snipers quickly earned a reputation for deadly effectiveness — and threatened to render moot the major battlefield advantage of the international coalition forming against the terror group.

“Air power is really only useful when [ISIS] moves through open terrain,” Chris Harmer, an analyst with the Institute for the Study of War, told U.S. News. “But that’s not how these fights go down, especially since the [Islamic State] uses so many snipers.”

Some of the tales of ISIS snipers’ dedication are extraordinary … to the point of being questionable.

“In yet another story of exceptional resilience, one [ISIS] sniper was found strapped high up among telephone poles in such a way that he would not have to leave his post,” The Christian Science Monitor reported in 2014.

“He was fed by an intravenous tube and was wearing a diaper; he apparently kept Iraqi units, which could not see him, at bay for two days in Garma. He died from a small shrapnel wound to the neck.”

Even if the accounts of such “resilience” are accurate, Islamic State’s propaganda videos seem to show that the group’s snipers are, in fact, unrefined guerilla fighters. Which is not say they’re not still utterly terrifying.

Picking Heads — a 10-minute montage — features snipers from Wilayat Salahuddin, Islamic State’s name for the Saladin Governorate of Iraq, a district northwest of Baghdad that includes the cities of Tikrit and Samarra.

The video includes clips and stills depicting a dozen or so ISIS militants undergoing sniper training, followed by scenes of snipers in action. There are several kill-shots in Picking Heads. It’s not for the faint of heart.

The sharpshooters appear to be armed primarily with Russian-made Dragunov sniper rifles, which are common in the region, plus American M24s that the militants might have seized from the Iraqi military.

There are also a couple of M-16 assault rifles and, in one clip, what appears to be a busted up anti-material rifle, perhaps Soviet-era. It’s difficult to identity from the angle and distance.

As Miles Vining at the Firearms Blog noted, the ISIS snipers don’t appear to have much training in concealment and sometimes use mismatched optics with their weapons. In some clips, they’re seen wearing desert camouflage in woodland areas. They often neglect to wrap their rifles to break the weapons’ outlines.

Many of the clips and stills that depict these potential shortcomings were undoubtedly taken during training — or were staged for the video.

If ISIS propagandists meant Picking Heads to feature the militant sharpshooters’ “greatest hits,” it might fall short for some viewers. More often than not, the shooters find their mark. In some cases, however, it’s tough to discern whether or not the shooter hit his target. And several shots clearly miss, either only wounding the target or going completely astray.

Despite the misses, the snipers still inflict considerable harm. They strike a couple dozen people in this video alone.

In November 2015, a senior Kurdish commander confessed that ISIS snipers had, at times, outfought his own skilled shooters. “The Peshmerga snipers were weak and before we could hit a single [ISIS] sniper, we would lose a few men,” the commander told The Guardian.

Many of the sniper victims in Picking Heads do indeed appear to be Peshmerga and YPG fighters or members of other anti-ISIS militias. A few seem as though they could be Iraqi army regulars.

It’s possible some of the targets aren’t combatants at all. At least two victims appear to be unarmed, wearing civilian clothes and carrying buckets to get water. There have been reports that ISIS snipers “shoot anything that moves,” including civilians.

They don’t call Islamic State a “terror group” for nothing.

ISIS snipers in the Saladin area have definitely taken out some high-level targets, as well. In December 2014, an Islamic State sharpshooter killed Brig. Gen. Hamid Taqavi of the Iranian Revolutionary Guards Corps’ elite Qods Force, while Taqavi was advising Iraqi troops and Shiite militias in Samarra.