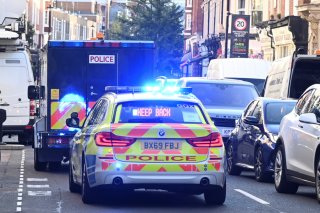 Fears of discrimination, a failure to deal with unruly prisoners, and an unwillingness on the part of prison administrators to address religious demands have created an environment in Britain’s jails that have become “no go zones” for non-Muslims.

These stark findings come from a recently published report: Terrorism in Prisons from the independent reviewer of terrorist legislation Jonathan Hall QC.

The report states that Islamist inmates, over the course of fifteen years, have adopted an “anti-state Islamist stance” that condones violence towards non-Muslim inmates, prison staff, and the general public.

The report was commissioned after the convicted Islamist terrorist Usman Khan carried out a terrorist attack near London Bridge in 2019.

Khan made an authentic-looking suicide belt and strapped it on himself in the hope that police officials believed he posed a threat. He then goaded police to shoot him, presumably in the belief that his martyrdom would achieve eternal paradise. This is one of the hallmarks of Salafi Jihadism, which posits the belief that death in the name of Allah (God) is better than life.

Usman Khan murdered Jack Merritt and Saskia Jones. Both individuals were at Fishmonger’s Hall where Khan was invited as a poster boy for de-radicalization. But fatally, it was known moments later that he had in fact gamed the system in order to fulfill his jihadist aims.

The report notes that Khan’s time in prison could be illustrated by a clear type of prison behavior. “Much but not all of it is related to Usman Khan’s role in Islamist groups within the prison,” the report said.

Such is the scale of Islamist group behavior that prisons have acquiesced into accepting it as just part of the prison landscape. In essence, Islamist extremists are sculpting prisons into places that are conducive to their aims and demands.

The report further illustrates this point by stating that Islamist inmates are setting up sharia courts including punishments such as flogging for Muslims whilst simultaneously assaulting non-Muslim inmates for “faith-based reasons.” Islamist inmates are also undermining prison imams by challenging them or boycotting Friday prayers (jummah).

Prison staff appear to be struggling with managing Islamist prisoners. For example, prisons are finding themselves in a situation where Islamists are grouping themselves together in large numbers to intimidate staff and undermine prison authority. In addition to this, they are also becoming adept at using insincere accusations of discrimination and “Islamophobia” against prisons if they do not get their way.

Whilst these findings may come as no surprise, the failure at an institutional level to tackle this could have devastating consequences both within prison and outside.

Only two years ago in 2020, three terrorist inmates were convicted for attacking a prison officer inside Belmarsh Prison in southeast London. Hashem Abedi (twenty-four), Ahmed Hassan (twenty-two), and Muhammed Saeed (twenty-three) attacked the prison official inside his office within the Category A unit—which holds individuals considered the most threatening to the public should they escape.

The trio was found guilty at Woolwich Crown Court for assault. They each received three years in prison serving their sentences consecutively with the sentences they are already serving.

The threat highlighted by this report makes some concerning findings. Whilst all Muslims are not Islamist extremists, there is certainly a need to focus on those inmates that may find themselves radicalized by incoming criminals who are Islamists.

As of March 31, 2021, official government statistics found that there were 157 individuals classed as Islamist extremists compared to only forty-four who were classed as “extreme right-wing.” Of those prisoners that are in custody for terrorism-connected offenses, the majority (73 percent) declared their religious affiliation as Muslim.

At an institutional level, the prison service needs to look at Islamist prisoners as cultural change-makers. Islamist prisoners are using violence to intimidate staff and inmates even though they are also fully aware that any punishment they receive only prolongs their time in prison. This, of course, matters little to them.

For Islamist prisoners, creating a prison environment that can be used to train Muslims and converts to become extremists helps them to achieve their jihadist aims. They do not need to be out in open society to be Jihadis, they can quite easily do that within prison. This raises serious concerns for the government and policymakers that need to consider whether prison—in its current formation—is actually working.

The report has highlighted a serious issue, and this is a necessary first step. Since Islamist prisoners are creating “no go zones” in prisons, the government and policymakers need to ensure that they are proactive in dealing with this threat. A failure to achieve this creates an Islamist prison system at odds with the very purpose of why individuals are placed in prison in the first place.

Wasiq Wasiq is a journalist specializing in defense and terrorism. You can follow him on Twitter: @WasiqUK.