This Isn't Science Fiction: How the CIA Stole a Russian Satellite 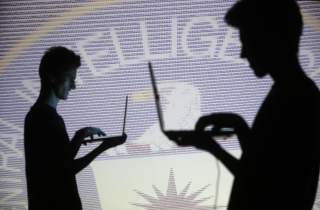 In a scheme worthy of Mission Impossible, CIA agents hijacked a Soviet spacecraft and probed its secrets.

When did this happen? That’s classified, as is the country where the caper occurred. In the declassified article on the subject in Studies in Intelligence, a CIA journal, much of the text has been blacked out by the agency’s censors.

But the article, released by the National Security Archive watchdog group, is full of tantalizing clues. Not to mention, it’s a great spy yarn.

The theft occurred when the Soviets sent one of their Lunik—also known as Luna—satellites for an exhibition tour of several nations in the early days of the Space Race. The CIA naturally was interested in the Luna probes, of which more than 40 attempted to orbit or land on the moon between 1958 and 1974.

The article in the winter 1967 issue Studies in Intelligence refers to the incident happening “a number of years ago,” so it probably occurred in the early 1960s. The Soviets were scoring propaganda points from their technological prowess by displaying a Luna satellite.

The CIA figured the Soviets weren’t crazy enough to send a real Lunaoverseas, but they decided to take a peek anyway at an exhibition in one city. With commendable discretion, the article recalls that after the exhibition closed, “a group of intelligence officers had unrestricted access to the Lunik for some 24 hours.”

In other words, American spies sneaked in for an unauthorized private viewing.

American agents were surprised to discover that it was indeed a real Luna, minus its engine and electrical components. Eager to get another look, the CIA sent its industrial experts on another black operation to photograph the craft’s equipment markings, which they hoped would divulge clues about Soviet space production.

But when the exhibition moved to yet another city—one source says it was in Mexico—the satellite had a 24-hour Soviet guard. So much for breaking into the exhibit again.

Ah, but U.S. spies discovered that after the show, the Luna would be transported by a truck to a railroad station and then on to the next city. Could this the break they needed? Maybe divert the freight car onto a railroad siding for a night? Nope, not feasible.

Then how about hijacking the truck on the way to the rail station?

The CIA arranged for the Luna to be on the last truck leaving the exhibition that night. After making sure that Soviet guards weren’t escorting the vehicle, “the truck was stopped at the last possible turn-off, a canvas was thrown over the crate, and a new driver took over.”

What happened to the original truck driver? The CIA history only says that he was “escorted to a hotel room and kept there for the night.” How he was “detained” isn’t clear, but it wouldn’t be surprising if money, liquor or prostitutes were involved.

Fortunately, the Soviet representative at the rail yard waited a little while and then went to his hotel room without raising an alarm.

Now the CIA technicians got to work. Standing on ladders, they broke into the 14-foot-high crate, partially disassembled the spacecraft—including removing 130 bolts from a hatch to the engine compartment—and photographed the insides.

The work began at 7:30 PM. At 5:00 AM, Luna was back on the truck and the original driver delivered it to the rail yard.

When the Soviet representative returned at 7:00 that morning, he found the truck and the spacecraft waiting for him, with no one the wiser.

What did this covert operation obtain? Analysis of the factory markings revealed the “probable identification of this Luna stage, the fact that it was the sixth one produced [and] identification of three electrical producers who supplied components,” as well as other clues to the Soviet space program, according to the CIA article.

Did it make a difference to the outcome of the Space Race? Probably not. By 1967, the Soviet Union was already falling behind, as the U.S. prepared for the Apollo landings two years later.