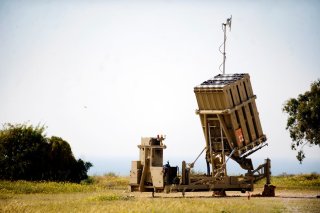 The mobile short-range air defense system will protect some of the United States’ forward-deployed naval assets deep in the western Pacific Ocean.

The United States Army is deploying Israel’s premier air defense system to Guam, where it will be well-positioned to defend the system from ballistic and cruise missiles.

“The 94th Army Air and Missile Defense Command is overseeing the temporary, experimental deployment of one of the Army’s Iron Dome Defense Systems to Andersen Air Force Base in Guam,” a U.S. Army statement on the deployment explained.

“The 2019 National Defense Authorization Act required the deployment of the Iron Dome system to an operational theater no later than the end of 2021. Soldiers and equipment from the 2-43Air Defense Artillery Battalion from Fort Bliss, Texas will deploy in order to fulfill those NDAA requirements, test the capabilities of the system, and further train and refine the deployment capabilities of air defenders. There is currently no plan to conduct a live-fire of the system while it is on Guam.”

The United States patterns with Israel, providing funding for the Iron Dome, so it is no surprise that the United States has an interest in deploying the air defense system, nor is the choice of location.

Guam is shaping up to be a central node of the United States’ Pacific presence. As a result, experts have urged the Biden administration to better provide for the island’s defense. The island hosts extensive naval support facilities, including a large airbase supporting long-range strategic bombers and submarine support infrastructure.

Both North Korea and China’s cruise missiles—and now hypersonic missiles—pose a threat to the United States mainland, as well as Guam, which is significantly nearer. As a result, some top naval brass has advocated deploying the Aegis Ashore air defense system to Guam. However, deploying Iron Dome to the island would also provide a robust defensive capability.

Although Iron Dome is combat tested and has an intercept rate of about ninety percent, the system could be overwhelmed by multiple rocket salvos. Not only would massed groups of missiles be more challenging to intercept accurately, but they would also be financially difficult to sustain given the estimated $70,000 to $100,000 cost per Iron Dome interceptor.

In the future, Israel’s Iron Dome and, indeed, air defenses more broadly could shift from physical interceptors to direct energy weapons, which cost mere cents or dollars per shot.