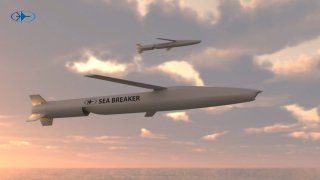 Israel’s Rafael Advanced Defense Systems showed off a new fifth-generation missile at the end of June. Dubbed “Sea Breaker,” the missile is a long-range attack weapon system for maritime and land-based operations, the company said. The missile can skim over the sea at low levels and fly through the valley to seek out high-value targets, distinguishing between civilian boats and enemy ships, as well as striking hardened headquarters units and taking out airfields.

The missile builds on Rafael’s success with other missiles used by Israel and countries around the world. This includes the Spice 250 and also Spike NLOS. Israel’s Spike missile systems are widely adored across Europe and other countries. The Sea Breaker is larger, several meters long with a range of 300km and a large 250lb warhead. Rafael says the missile is a “long range, autonomous, precision-guided missile system, enabling significant attack performance against a variety of high-value maritime and land targets.”

What this means is that the missile caters to the new battlefield that requires weapons that can use scene matching and artificial intelligence and automatic target recognition, technologies Rafael has pioneered. Rafael is Israel’s traditional research and development defense firm, having developed Iron Dome air defense systems and Trophy defense for tanks. It is also a missile builder and knows how to hone the optics and artificial intelligence that are needed to help missiles achieve extreme precision.

Rafael says Sea Breaker can fit inside its Spyder air defense batteries, meaning it could be used as a kind of “plug and play” with air defense missiles. It can also be put on ships and its compact size enables that deployment. This is perfect for so-called “brown water” missions near the shore. It can be used in complex environments to avoid electronic countermeasures and operate where there are GPS denied environments, “as for engagements in which previous generation RF-seeker-based missiles are not effective,” Rafael says.

Sea Breaker can be launched from naval platforms, varying in size, from fast attack missile boats to corvettes and frigates. “The land version is a central part of the shore defense, based on Rafael's highly mobile SPYDER launchers. The battery architecture supports standalone launchers, or operation as an integrated solution, with a command and control unit (CCU) and various sensors, based on customer requirements,” the company notes.

The missile’s datalink also supports real-time man-in-the-loop decisionmaking and tactical updates. This is important for those complex missions where missiles are seeking out targets that might suddenly be obscured by civilians and need to be aborted. It also features a mid-flight abort capability and Battle Damage Assessment. At an unveiling in central Israel, Rafael showcased the kinds of missions the missile can handle, including striking ships and land-based targets.

Developers noted its heritage as they showed off other Rafael missiles on stage. This missile’s unique quality is that it was pitched for land and sea battles. “Our business is precision,” said one of the Rafael presenters. The world is moving into an era where missiles need to have electro-optics and be able to operate in areas where GPS is not usable. Missiles need to be able to differentiate between enemy targets and similar civilian vehicles. Smart bombs and cruise missiles have been around for decades. The Sea Breaker uses the pop-out wings that other weapon systems have used. The goal here is to take these kinds of systems to the next generation. Autonomy is more important on complex new battlefields, with weapon systems needing the kind of deep learning that computers can offer these days. Rafael hopes Sea Breaker will fill this niche.