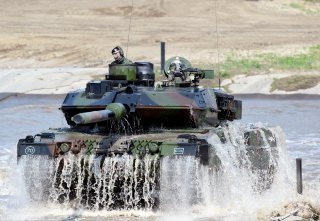 The company, based in Germany, will supply European customers—principally Germany—with a variant of the Trophy Active Protection System that Israel has used to protect its tanks and other armored vehicles. Although the joint venture has yet to clear anti-trust and regulatory hurdles, it could start integrating the Trophy APS onto German Bundeswehr vehicles as soon as next year.

The announcement noted that Germany is the first European country to have adopted the Trophy system and joins the United States in equipping their main battle tanks with the defensive system.

“Our joint strategic move to establish the EuroTrophy joint venture is a clear commitment to Germany as a prime business location and underscores the importance of active protection systems,” Ralf Ketzel, the CEO of Krauss-Maffei Wegmann, explained. “On today’s and tomorrow’s battlefields, they will be an important building block for the crew’s endurance, effectiveness and protection. As the leading system supplier for armored vehicles, the integration of state-of-the-art capabilities into our products is essential.”

Israeli designed the Trophy Active Protection System to protect their Merkava main battle tanks, and the system does so by locating and shooting down a variety of incoming munitions. Trophy “creates a neutralization bubble around the vehicle. It rapidly detects, classifies and engages all known chemical energy (CE) threats—including recoilless rifles, ATGMs, AT rockets, HEAT tank rounds, and RPGs,” according to a Rafael company statement.

Trophy not only protects armor vehicles but also “increases the lethality of combat forces, successfully neutralizing the enemy’s anti-tank teams. It can locate the fire source, enabling the crew to return fire effectively using the platform’s armament, or by interfacing with other fighting platforms via the BMS network,” according to the statement.

Trophy has proven itself in combat, protecting Israeli tank crews in a variety of combat situations as far back as 2011. The protection offered by Trophy may prompt a paradigm shift in armored warfare, as the Israeli active protection system, while not insurmountable, is very effective—no wonder Germany is eager to tap into the Israeli technology.