Is Israel Heading Towards a 'Preventive War' Against Iran? 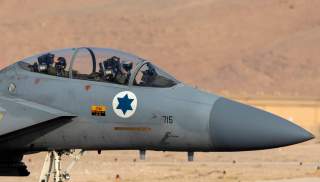 On October 10, 2019, during a memorial service in Jerusalem for the fallen soldiers of the 1973 Yom Kippur War, Israeli Prime Minister Benjamin Netanyahu spoke bluntly about the conclusions to be drawn from that war: "Few hours before the outbreak of the war," Netanyahu stated, "when it was already clear that the confrontation was inevitable, Israel did not undertake the necessary measures to neutralize the imminent threat. Israel's reluctance to carry out a preventive strike against Egypt enabled our enemies to take the initiative and inflict on us heavy casualties. I by no means underestimate the difficulties embedded in the decision to undertake a preventive strike. This is a severe dilemma for every Israeli government. Certainly, because its implications are not clear. However, Israel faces sometimes existential threats in which it cannot, and should not, rule out the option of a preventive strike. In fact, under such circumstances a preventive strike is a must."

To those who might have thought that Netanyahu was engaged in historical debate, Netanyahu made it clear that his message relates to present day, and the existential threat Iran poses to Israel: "Iran," Netanyahu said, "threatens to wipe us off the map … The IDF is prepared to preempt any threat, defensively and offensively, with crushing strength, in weaponry and in spirit. This is the tremendous spirit that was instilled in us by the generation of the Yom Kippur War."

This is not the first time that the Israeli prime minister had mentioned the possibility of taking preemptive military action against Iran. The period between 2010–2011 was perhaps the closest Israel had ever been to launching a preemptive strike on Iranian nuclear facilities, with strong support for the initiative coming from both Prime Minister Netanyahu and then-Defense Minister Ehud Barak. What motivated Netanyahu and Barak to consider a preemptive strike on Iranian nuclear facilities? These were the following main premises:

First, if left unimpeded, Iranian nuclear facilities will enter into "zone of immunity." That is, they will become either so well protected or so well developed that an attack on them would be a short-term solution at best, and at worst—completely futile. Netanyahu believed Iran was quickly approaching this threshold and sought to strike while such an operation could still yield the desired result of thwarting Iranian nuclear ambitions in its infancy.

Third, covert operations, including cyber-attacks on the Iranian nuclear program and operations against nuclear scientists might postpone the project, but not eliminate it entirely.

Fourth, Israel is aware of its limited ability to destroy the Iranian facilities in one strike. These facilities, unlike the Iraqi or the Syrian nuclear facilities which Israel managed to demolish in one strike, are located deep underground and are spread throughout the country. However, Israel does not necessarily need to destroy every nuclear facility in Iran for it to cripple or dissuade Iran from its nuclear ambitions; it could be enough for Israel to cause significant damage to these facilities. Such damage could lead the Iranian regime to the rational conclusion that it is not worthwhile to try to renew its nuclear project simply because this would require vast amounts of resources and will put Iran further into international isolation. There would also be the possibility of another Israeli strike.

In 2010-2011, Israel came very close to launching such an operation. The plan was eventually sidelined due to opposition from Israel Defense Forces (IDF) Chief Gabi Ashkenazi, the head of the Mossad, Meir Dagan, and multiple ministers who believed that the IDF was not ready to carry out this action.

The concept of a preemptive strike or preventive war was not new to Israeli strategic doctrine but was rather a key element of it since nearly the inception of the state itself. This is largely due to Israel’s lack of strategic geographical depth, in addition to its small population and standing army in relation to its Arab neighbors. Furthermore, Israel believed that since its enemies repeatedly call for its destruction, it has full moral justification to carry out a preemptive strike even during periods of calm and without any direct provocations by its enemies.

Israel has notably employed this tactic numerous times during its seventy-one-year history with great success. The Sinai War in 1956 was one of the earliest instances of this. Later on, during the beginning of the Six-Day War in 1967, the Israeli Air Force (IAF) destroyed much of the Egyptian, Jordanian, and Syrian air forces before their planes could even get off the ground. The establishment of complete air supremacy was a crucial factor in the overwhelming success of the IDF during this conflict. Furthermore, in 1981, the IAF successfully destroyed an Iraqi nuclear reactor, and in 2007, the IAF destroyed a Syrian nuclear site.

Now, faced with the increasing likelihood of war, Israel seems to be heading again towards the conclusion that a preventive strike against Iran is inevitable, as Israel’s operations against the Iranian nuclear project and its sporadic attacks on Iranian proxies in Syria and Iraq, while operationally successful, have not succeeded in deterring Iran from: (1) expanding "proliferation-sensitive activities [which] raises concerns that Iran is positioning itself to have the option of a rapid nuclear breakout"; (2) continuing its incursion into Iraq, Syria and Lebanon. Thus, "undermining the sovereignty of its neighbors"; (3) developing and transporting precision missile technology, principally to its Lebanese proxy, Hezbollah. These missiles pose an extremely grave strategic threat to Israel and other United States allies.

The Trump administration has been sympathetic with regard to Israeli security concerns. However, it is essentially carrying out a policy of containment towards Iran as it is reluctant to effectively retaliate against Iran’s aggressive foreign policy. Israel is certainly aware that the situation in Washington could change as a result of the different political and legal pressures mounting on the current president of the United States. Another American administration may be less supportive, if not outright opposed to this sort of military action taken by Israel vis-à-vis Iran.

Over the past decade, there has been a drastic realignment in the Middle East largely due to the growing Iranian threat, which has pushed many of the Arab Gulf states closer to Israel as they battle a common enemy. While relations are still not particularly open or formally diplomatic, there is now more potential for reconciliation than there ever has been between Israel and some of its Arab neighbors. If Israel wants to look like a reliable ally and to enhance its position in the eyes of the Gulf States, it needs to show power and resilience, and that it can be depended on in the event of a conflict with Iran. No other state is able or willing to undertake this role.

Under these circumstances, there are certainly compelling factors pushing Israel towards preemptive action against Iran. However, at the same time, Israel is well aware that the legitimacy of any military operation against Iran will undoubtedly face harsh questioning in the international arena, especially since Iran is a signatory to the Joint Comprehensive Plan of Action and the Nuclear Non-Proliferation Treaty (though its compliance with said treaties is frequently debated). Furthermore, the current weak political position of Prime Minister Netanyahu due to his impending corruption inquiry in addition to the absence of a functioning Israeli government gravely impedes Israel's ability to undertake major critical decisions at this point in time.

Professor Zaki Shalom is a senior research fellow at the Institute for National Security Studies (INSS) in Tel Aviv, Israel. He has published extensively on various facets of Israel's defense policy, the Arab-Israeli conflict, and the role of the superpowers in the Middle East, and Israel's struggle against Islamic terror. His work has also focused on the study of Israel's nuclear option, both in historical and contemporary perspectives.

Jacob Aaron Collier is a research intern at the Institute for National Security Studies (INSS) in Tel Aviv, Israel, and an MA candidate in security and diplomacy studies at Tel Aviv University. He is a graduate of Syracuse University's Maxwell School of Citizenship and Public Affairs where he earned a BA in Political Science and Global Security Studies.