Israel Might Have as Many as 300 Nuclear Weapons. And Some Are in the 'Ocean.' 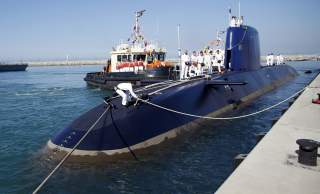 Image: Israel Navy soldiers stand on the Rahav, the fifth submarine in the fleet, as it docks in Haifa port January 12, 2016. The Dolphin-class submarines, widely believed to be capable of firing nuclear missiles, were manufactured in Germany and sold to Israel at deep discounts as part of Berlin's commitment to shoring up the security of the country set in part as a haven for Jews who survived the Holocaust. REUTERS/Baz Ratner