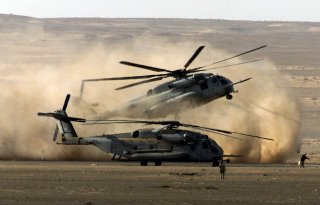 The Ministry of Defense also said on Twitter that “the procurement of these platforms is part of a wider MOD program to strengthen the capabilities of the IDF and preparedness to face current and developing threats.”

Israel operates a large inventory of American-designed military equipment. The country historically bought small arms and early armored vehicles and now flies American aircraft. Notably, the Israeli F-35I is the only unique variant aside from the A, B, and C variants.

The helicopters that Israel plans to acquire are the United States’ CH-53K King Stallion, the largest and heaviest helicopter in the United States military. The heavy-lift cargo helicopter is powered by three 7,500 horsepower engines and can transport twelve tons of cargo. Though they’ve had some teething issues — notably dust ingestion during brown-out flight conditions — they are some of the most capable heavy lift helos in the world.

The tankers, Boeing’s KC-46 Pegasus, have also experienced issues. Their boom refueling system did not undergo adequate development testing with various aircraft and has had problems. Glitches in the plane’s Remote Vision System also created issues during refueling operations, necessitating a fix.

Israel currently flies an aged fleet of American tanker aircraft, Boeing 707 derivatives known as Reem tankers. The aircraft date from the early 1970s and have hit serviceability snags due to a lack of spare parts that are now out of regular production.

Though the twelve heavy-lift helicopters and pair of tankers are on order, they won’t enter Israeli service anytime soon. Israel could take delivery of the first of the CH-53Ks in just under two years, but the KC-46As won’t be delivered until 2024.

Until then, Israel lacks a robust refueling capability and could struggle to strike protected facility targets deep within Iran.

Though the new aircraft Israel has on order are not perfect, they would nonetheless offer new capabilities — especially if their issues can be sorted through. And with an increasingly belligerent Iran, it is little wonder Israel wants them.