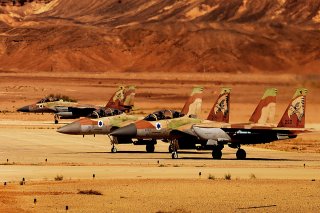 A leading major general in the Israeli Defense Forces said this week that in Israel’s wars in the future, the nation will likely come under fire from rockets and missiles-as many as 2,000 a day.

The comments came from  OC Home Front Command Maj.-Gen. Uri Gordin at the B’Sheva Conference in Jerusalem, and were reported by The Jerusalem Post.

“[Our] enemies on the different fronts need to know that if needed, we will activate a powerful military that has never been seen before,” Gordin said, per the newspaper.

“They know they cannot defeat us on the battlefield so they try to move the war to a second front and that is our homes and in our cities.”

In the first decades following its independence in 1948, Israel mostly fought conventional air and ground wars against its enemies, including in the 1948 War of Independence, and 1967 Six-Day War, and the 1973 Yom Kippur War.

More recently, however, Israel has often suffered periods of sustained rocket attacks, most often from Hezbollah (located in Lebanon) and Hamas (in Gaza.) This has led specifically to Israeli military action in Gaza in 2008-2009, 2012 and 2014.

Since 2011, Israel has had in place a missile defense system called the Iron Dome. Developed with the assistance of the United States, starting in 2004, the Iron Dome system has been incredibly successful, at least according to the Israeli military. It’s been claimed that the Iron Dome has stopped 95 percent of incoming rockets.

“The detection technology is the first tier of three. A radar detects the presence of a missile over or near a given area. Then that information is relayed to a control center computer where the missile trajectory is calculated. If the system determines the missile will not hit a populated area, the missile is allowed to land, but if the missile is a threat countermeasures are put into action.”

While Prime Minister Benjamin Netanyahu and former President Barack Obama were often at odds during the years they were both in office, Netanyahu did thank Obama, during his address to Congress in 2015, for support of missile defense, including “his support for more missile interceptors during our operation last summer when we took on Hamas terrorists.”