This Israeli Air Force F-15 “Frankeneagle” Is Back in Business, but You Won't Guess What Damaged It 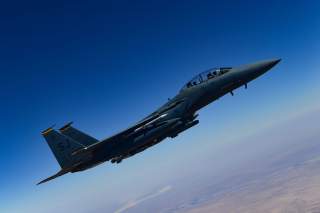 Noteworthy, the “Edge of the Spear” Squadron’s personnel felt the absence of the aircraft.

Do you remember the Israeli Air Force (IAF) F-15 “FrankenEagle,” the F-15 that was critically damaged in an emergency landing after being hit by a flock of pelicans in Jun. 2011?

On Feb. 19, 2017, the aircraft finally took off for its first sortie since returning to the “Edge of the Spear” Squadron after a long reconstruction period that culminated in the first flight of the restored aircraft in the autumn of 2016.

The Baz (Falcon, as the F-15 Eagle is dubbed by IAF) tail number 122 was operated by pilot Lt. Col. Rotem who ironically was the mishap pilot during the bird strike.

“The aircraft is back in the playground and has become an operational aircraft in the IAF. It proved excellent capabilities in aerial combat, flew and maneuvered like the first time I flew it before the accident. You can feel its soul”, pointed out Lt. Col. Rotem, few minutes after landing. “Last time the aircraft landed in the squadron it was an emergency landing after which the aircraft was defined as a ‘total loss’. Taking this jet for its first sortie was a challenge for the squadron’s technical department. We were able to take off for the first sortie thanks to them and their hard work”.

Noteworthy, the “Edge of the Spear” Squadron’s personnel felt the absence of the aircraft.

For this reason they were excited to see it taxi its way from the squadron to the runway and take off once again.

“’Baz’ 122 is an incredible combination, a testimony of the IDF and IAF’s greatness. What started as an unexpected, serious accident that was met by a very high level of professionalism displayed by the aircrew who managed to land the aircraft, ended, to my great pleasure, with a border-crossing project pushed by many elements to return the aircraft to the order of power”, said Lt. Col. Ilan, Commander of the “Edge of the Spear” Squadron. “Working on the jet helped us learn about the ‘Baz’ from the inside and the IAF will use the knowledge we gathered in this project in order to renovate and begin operating the double-seat F-15 jets that arrived from the U.S last year and that will be integrated in the Israeli ‘Baz’ squadrons”.