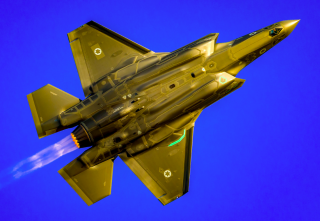 Israeli F-15s, F-16Is and F-35s flew alongside U.S. F-16s as well as Italian F-35s among more than seventy warplanes that participated in the Blue Flag exercise in November. At Israel’s Uvda Air Base airmen from five air forces flew together and practiced flying at low altitude to suppress simulated air defense and practice interoperability with NATO’s Link 16 communications system.

The exercise, from November 3 to 14, came amid rising tensions with Iran and forty-hours of conflict between Israel and Palestinian Islamic Jihad in Gaza. Russia’s Foreign Ministry claimed on November 21 that Israel had also carried out four nights of airstrikes in Syria over a ten-day period. Israel claimed only that it carried out widespread strikes on November 20 after Iran’s IRGC fired rockets at Israel from Syria. Moscow’s assertions, published in Israeli media, stated that on November 12 Israel struck the home of PIJ member Akram al-Ajouri and that on November 18 Israel struck near Albukamal in Syria near the Iraqi border. This same Albukamal area was hit with airstrikes on September 9, targeting an alleged Iranian base. Israel has admitted to more than 1,000 airstrikes in Syria. Russia, which backs Syria’s government, also claimed Israel carried out another airstrike on November 19 and that on November 20, in response to Iranian rockets fired at Israel from Syria, “some forty cruise missiles [were fired] at targets in the Damascus suburbs.”

The Blue Flag exercise had no direct relation to the tension in Gaza and Syria, it was planned long before and is the fourth of its kind. However, the exercise came in the context of these tensions and wider regional tensions with Iran. The US 480 Expeditionary Squadron, 52nd Fighter Wing out of Spangdahlem Air Base took part, along with the Italians, Germans and Greeks. The exercise gave Israel and its partners an ability to work closely together. CENTCOM commander General Kenneth McKenzie came to Israel on November 11 and U.S. Air Force Chief of Staff David Goldfein visited Israel at the end of the exercise. Chairman of the Joint Chiefs Mark Milley then arrived on November 25. These high-level meetings coincided with the important drill for Israel.

Israeli jets connected to the Link 16 network and the use of Israeli F-35s with Italian F-35s have wider implications for Israel’s relations with NATO and various European countries. That could mean the potential for more joint work in the future. Israel hosted a NATO drill involving medivacs at sea on October 31 dubbed Crystal Sea. Lt. Gen. Steven Basham of the US Air Forces in Europe – Air Forces Africa Deputy Commander (USAFE-AFAFRICA) was also present. He praised the joint work as a way to improve readiness, integration and interoperability.

All this comes alongside new reports that in the last weeks Iran transferred short-range ballistic missiles to Iraq over the last weeks. Iran has been transferring missiles to Iraq and allegedly via Iraq to Syria since at least last year according to reports. Iraq has also accused Israel of striking Iranian-backed militia bases in July and August in Iraq. According to reports at CNBC in July Israel was the first country to use the F-35 in combat. Israel is also increasingly key to the overall F-35 program, with the delivery of the 100th advanced wing for the aircraft by Israel’s Israel Aerospace Industries. Israel received its first two F-35s in December 2016. Its version is known as the Adir and it was declared operation that year, with a total of 16 delivered by July 2019. It is a key part of Israel’s Qualitative Military Edge in the region, which makes Israel more advanced in defense technology than other regional powers.

Blue Flag helped fit into this as part of the ecosystem of military exercises and operations that improve Israel’s defense relations with the U.S. and other allies in the region and globally. Having a 5th generation F-35s flying with F-16s and F-15s, to conduct low-level missions in early November was important and shows the kinds of issues that Israel and allied countries face. For instance, Israel used Patriot batteries to simulate advanced SAM batteries. Israel has to deal with a variety of air defense in Syria, including destroying an Iranian 3rd Khordad system, according to Israel’s Ynet. Syria has Russian Pantsir S2 and Buk systems, as well as S-200 and S-300s, the latter of which were delivered in October 2018 but never used. An Israeli F-16 crashed in October 2018 after being targeted by an S-200. In a September incident off Latakia, an S-200 seeking out an Israeli F-16 hit a Russian plane according to Russia’s TASS. A Syrian-fired S-200 also landed in Cyprus in July 2019, allegedly fired at an Israeli warplane as well. Israel used its Arrow 3 system to shoot down an S-200 in March 2017 when the Syrian missile appeared to be heading for Israel over Jordan. This makes the exercise flying low altitude against air defense all the more real world.

Israel calls Blue Flag its most advanced drill of its kind. Training against SAMs with different generations of jets on the data link and in an environment that included drones, helicopters and the Gulfstream G550 which, depending on the configuration, is used for electronic warfare, surveillance and jamming. It can also be used to provide a 360-degree view of the battlefield to track objectives and targets.

According to a statement from IAI, the company supplied an innovative drill debriefing system that was upgraded for Blue Flag. “In this year’s exercise the debriefing system processed for the first time, data from Israeli and Italian F-35 fighters, as well as real-time images of moving targets and air defense launches from a range of systems.”