Israel's Military Is One of the Best on the Planet. America Needs to Keep It That Way. 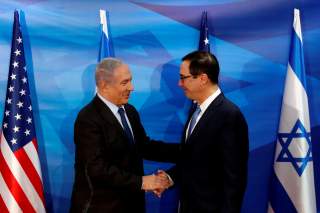 The U.S. military is very busy these days. The Department of Defense wants to focus its finite resources on great power competition with China and Russia, but persistent threats from Iran and Islamist terrorists demand continued attention. How can the Pentagon address this dilemma? Strengthening Washington’s security partnership with Israel in areas of military doctrine and weapons development may provide part of the answer.

The 2018 National Defense Strategy (NDS) made an admirable effort to establish clear priorities. “Long-term strategic competitions with China and Russia are the principal priorities for the Department,” it concluded. Furthermore, the NDS stated unequivocally, “Inter-state competition, not terrorism, is now the primary concern in U.S. national security.” Yet, as much as some might like to focus exclusively on great power competition, the NDS itself also acknowledged persistent threats from Iran and terrorist organizations. “In the Middle East, Iran is competing with its neighbors, asserting an arc of influence and instability while vying for regional hegemony, using state-sponsored terrorist activities, a growing network of proxies, and its missile program to achieve its objectives,” the NDS assessed. Tehran’s activities over the last few months underscore these concerns.

The NDS notes, “… threats to stability remain as terrorist groups with long reach continue to murder the innocent and threaten peace more broadly.” Islamist terrorists are far from defeated. Without constant pressure, seemingly tactical terror threats can quickly become strategically devastating for the United States. Another 9/11-style terror attack emanating from the wider Middle East—perhaps this time with a weapon of mass destruction—could kill tens of thousands of Americans and require the diversion of military resources needed for great power competition.

Clearly, the United States has to be strategically competent enough to win the global great power competition and defend its interests in the Middle East. This is easier said than done, however, as Washington’s resources are limited, even with recent increases in defense spending.

General Mark Milley, the new Chairman of the Joint Chiefs of Staff, testified in July that the United States seeks to counter terrorism and maintain a favorable balance in the Middle East by training, advising, assisting, and enabling partners, as well as through foreign military sales. This is an essential and potentially cost-effective, "economy of force" approach to U.S. strategy in the Middle East.

But to focus resources on China and Russia and address persistent threats in the Middle East, the United States needs to identify additional steps—particularly following the Trump administration’s abrupt withdrawal from Syria. One such step might include deeper doctrinal and weapons development collaboration with America’s closest ally in the region, Israel.

Prompted by growing threats and hard lessons, both the United States and Israel are undertaking generational reforms to military doctrine and capabilities.

The U.S. Army, for example, is doing so at a scale not seen in decades—standing up Army Futures Command and developing a new warfighting doctrine called Multi-Domain Operations. And the U.S. Army is not alone. The U.S. Marine Corps recently issued a new Commandant’s Planning Guidance (CPG), which serves as “the authoritative document for Service-level planning,” describing force development priorities for the Corps. The new CPG represents an unusually courageous assessment of how the Marine Corps must change.

To test and hone its new key concepts and capabilities, the Army has deployed Multi-Domain Task Force pilots to Europe and the Indo-Pacific. As part of the broader effort, the Army has established eight cross-functional teams to “integrate and synchronize” the Army’s effort to pursue its top weapon modernization priorities.

Israel has been active, too. As detailed in a recent article by retired Israel Defense Forces (IDF) Lt. General Gadi Eisenkot and Reserve Colonel Gabi Siboni, the IDF is in the midst of generational reforms as well. Spurred by evolving threats and hard lessons from the 2006 Lebanon War, Israel has developed military doctrine called the “Campaign Between Wars” (CBW). The authors describe the CBW as a “fundamental change in the pattern of Israeli security operations.”

As its name suggests, Israel’s new military doctrine rejects the “binary approach of either preparing for war or openly waging it.” The doctrine starts with an obvious but essential point:   Adversaries do not stand still in the time between wars. Instead, they use a variety of tools to incrementally gain tactical, operational, and strategic advantage. Israel’s adversaries, such as Iran’s Qods Force and Hezbollah, have worked incessantly to undermine Israeli security and better position and arm themselves for the next major conflict. Israel has rightly determined that it cannot stand still and that the risks of inaction outweigh those associated with action. Accordingly, Israel's CBW doctrine promotes "proactive, offensive actions based on extremely high-quality intelligence and clandestine efforts." These efforts include military, economic, and political elements that aim to protect Israel's security while avoiding escalation to full-scale war.

This should sound familiar to readers in the American defense community. The 2018 bipartisan, congressionally mandated National Defense Strategy Commission report described gray-zone tactics used in the “space between war and peace.” According to the Commission, such tactics include “everything from strong-arm diplomacy and economic coercion, to media manipulation and cyberattacks, to use of paramilitaries and proxy forces.” While the Commission had China and Russia primarily in mind, this describes well the tactics often employed by Israel’s adversaries.

The fact that both the United States and Israel are in the early stages of developing, refining, and implementing new military doctrines and operational concepts, as well as researching, developing, and procuring the weapons necessary to carry them out, presents an opportunity for both countries. A more systematic and institutionalized effort—upfront—to co-develop shared doctrine and weapons could benefit the United States both in the Middle East and in global great power competition. And it could simultaneously strengthen a close regional ally in the process.

The strategic interests and military capabilities of the United States and Israel are, of course, not identical. America is a global superpower with the interests, capabilities, and burdens associated with that status. Israel, while possessing a formidable military, has a more regional strategic orientation. Accordingly, America’s emerging Multi-Domain Operations will be different from Israel’s CBW. Americans should not expect an Israeli naval armada to join U.S. freedom of navigation patrols in the Taiwan Strait or an IDF brigade to help patrol in the Baltics. Nor would deeper cooperation necessitate additional U.S. deployments in the region. On the contrary, it might reduce the need.

The fact remains, however, that America’s adversaries in the Middle East are virtually indistinguishable from those of Israel. From an American perspective, Israel’s capability and willingness to target assertively Iran’s Qods Force and Hezbollah are welcome, serving to undermine Tehran’s reach in Syria and Iraq. Indeed, in recent months, Israel has aggressively targeted Iranian militants and their proxies in Syria, Lebanon, and Iraq. Such strikes keep strategic pressure on these organizations, leaving them with less time, space, and security in which to plot attacks and build infrastructure.

If Israel is effectively and persistently targeting these American foes, it is functionally advancing U.S. security interests without putting American lives at risk. This frees up U.S. resources that Washington may employ elsewhere in the great power competition, such as in Eastern Europe or the Info-Pacific.

While these existing elements of the bilateral security partnership are certainly positive, much more can be done for the benefit of both countries. The Senate Armed Services Committee recognized as much in its FY 2020 National Defense Authorization Act Report. After acknowledging the United States and Israel’s cooperative research and development (R&D) on missile defense and anti-tunneling capabilities, the committee went on to direct the Defense Department to submit a report by next March on the feasibility and desirability of such cooperation in additional areas to address “shared capability gaps.”

However, as an essential precursor to additional defense cooperation, Washington and Jerusalem must ensure they are aligned on key issues related to China, especially Beijing’s technology theft. Some in Israel assert they have already addressed national security concerns related to Chinese activities in Israel, yet continue to make a distinction between the protection of military versus civilian technologies. Through hard lessons, Washington has finally awakened to the fact that the military-civilian distinction has increasingly little meaning when it comes to Chinese businesses.