Israel's Navy Is A Nuclear Power 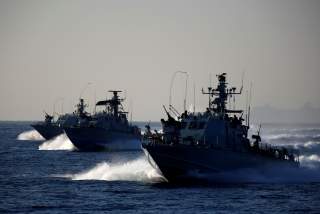 The Dolphins mainly operate in the Mediterranean. Haifa is Israel’s sole submarine base. Their operational spectrum is far-ranging, from the fighting of hostile naval forces to the bombardment of land targets with submarine-launched missiles. The subs can carry up to 16 missiles or torpedoes. Since the Dolphins can operate in shallow waters as well, they are perfectly equipped for gathering intelligence in periscope depth off enemy shores, and provide an ideal forward operational base for special forces.

It is widely assumed that Israel uses the enlarged tubes to launch nuclear-tipped cruise missiles. If this is true, the Dolphin subs provide Israel with a second-strike capability. Jerusalem wanted to acquire the U.S. Tomahawk with its 2,500-kilometer range.

When Washington denied the request, Israel probably tried to develop cruise missiles on her own. As one can imagine, available information is sparse. Media reports claimed that Israel might have tested a submarine-launched cruise missile off the shore of Sri Lanka in May 2000.

It seems plausible that Israel modified the Popeye air-to-surface missile produced by the Israeli company Rafael. An enlargement of the missile provides more space for fuel. Thus, a range of 1,500 kilometers with a warhead of up to 200 kilograms may be possible. In fact, this would be a proper explanation for the wider diameter of the torpedo tubes.

For several years now, Israel has sought to modernize its Sa’ar 5 corvettes. First, Jerusalem planned to acquire the American Freedom-class Littoral Combat Ship, but it turned out to be too expensive. Jerusalem then approached the German Thyssen Krupp Marine Systems and the Blohm+Voss shipyard in Hamburg.

Eventually, Jerusalem commissioned four ships of the Meko A-100 class — similar to Germany’s Braunschweig-class corvette — after tedious negotiations with the German government regarding financial support. In December 2014, Berlin agreed to subsidize the ships’ construction with 115 million Euros.

One of the crucial missions that these Sa’ar 6 ships will have to tackle is the protection of Israel’s gas rigs in the Mediterranean. Thus, they will be equipped with Tamir interceptor missiles, basically transforming them into swimming Iron Dome vessels. The first Sa’ar 6 is scheduled to arrive in Israel in 2019. With a displacement of about 2,000 tons and a length of around 90 meters, it will become Israel’s mightiest naval surface vessel.

In addition, Israel is currently updating its fleet of missile boats. Israel Shipyards is building these Sa’ar 72. In May 2013, the Israeli navy proudly presented the mini-corvette at the International Maritime Defense Exhibition in Singapore. The ship is 72 meters long and can reach speeds up to 30 knots. It has a range of up to 5,500 kilometers and is expected to be operational in 2018.

In 2016, Israel and Germany signed a general agreement for three additional Dolphin II submarines worth up to 1.5 billion Euros. Israel’s government apparently plans to replace the older Dolphins with the new ones from the year 2027 onward. However, the decision to enlarge the submarine fleet is highly controversial in Israel because Prime Minister Benjamin Netanyahu pushed the procurement through against the advice of former defense minister Moshe Ya’alon and high-ranking officers in the IDF, who suggested devoting the money to more urgent military needs.

In addition, leading Israeli figures involved in the negotiations for the deal are currently under investigation for corruption, fraud and other offenses. Thus, in mid-July 2017, the German government put the deal on hold, although Berlin had already approved it.