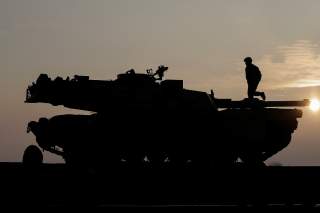 Active protection systems (APS) are rapidly becoming a must-have feature for heavy armored vehicles on the modern battlefield. Experiences from Syria and Ukraine have shown that anti-tank guided missiles (ATGMs) are lethal threats for even prepared crews. Hard-kill APS are one of the strongest counters to these ATGMs, they are designed to detect and neutralize them with a spray of projectiles.

The U.S. Army has long planned to fit APS onto their Infantry Fighting Vehicles (IFVs) and Main Battle Tanks (MBTs). However, these projects have been slow going due to expenditure on Iraqi and Afghan operations until the recent push to rearm for conventional wars and the entry of U.S. troops into Syria. APS are also rarely “drop in'' upgrades, requiring positioning of bulky sensors and interception modules with (ideally) 360 degree coverage of the vehicle. This can result in APS systems interfering or blocking the line of sight or fields of fire of auxiliary weapons or sights on the top of a vehicle.

However, the Army’s plan to integrate the Israeli Iron Fist onto the Bradley has proven difficult, and faces major delays in 2020. Many technical programs were revealed during the program being “fast-tracked” in 2019, and the lack of technical maturity has led to the Army delaying the program.

Joseph Trevithick covers one issue with Iron Fist on the Bradley in detail in an article for The Drive, the current versions of the Bradley don’t have enough power to run the Iron Fist’s suite of sensors and interceptors, requiring an add-on auxiliary power unit (APU) to function. This is a rather critical limitation, APUs add complexity, repair difficulty, and fuel consumption. Also, they are typically mounted on the outside of a vehicle, though the details about the add-on APUs on the Bradley are scarce. This can possibly result in hits to the APU knocking out the APS capability of the vehicle, or power to other critical systems in the Bradley.

Iron Fist, as installed on the Bradley, was also found to have issues with internal power management. The Army’s program manager, in an interview with Defense News, emphasized that this was not related to the Bradley’s general inability to power Iron Fist, power failures occurred on a test vehicle which was modified to provide sufficient levels of power to allow Iron Fist to function effectively. Iron Fist was also found to have problems with missing or “dudding”, when the hard-kill interceptors failed to fire or hit their target.

These issues lead the Army to cut funding for the project, preventing simultaneous production and testing in FY2021. But it’s important to note that Iron Fist is only an “interim” APS, with the Army developing more advanced systems which will likely be better integrated for its next-generation IFVs.

The issues with Iron Fist on the Bradley are illustrative of how retrofitting modern technology to older chassis can prove to be far more complicated than it would appear. APS’ need to be fully integrated into the design of a vehicle to function optimally.