It’s Official: July Was the Hottest Month In ALL of Recorded Human History 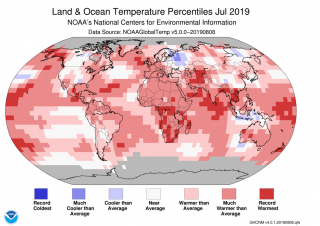 The world just lived through the hottest month of the year ever recorded in human history.

According to new data just released by the U.S. National Oceanic and Atmospheric Administration (NOAA), July 2019 has broken all records for the hottest month, with temperatures 1.71 degrees Fahrenheit (0.95 degrees Celsius) above the 20th century average.

NOAA’s calculations confirm the findings of three other recently released data sets. Independent findings from the Copernicus Climate Change Service (a European climate agency), Japan Meteorological Agency, and Berkeley Earth all show that last month was the warmest on Earth since record-keeping began.

According to data from Berkeley Earth, for instance, last month was 2.2 degrees Fahrenheit (1.22 degrees Celsius) above pre-industrial levels, just shy of the Paris Agreement’s aspirational target of limiting global warming to 1.5 degrees.

In a statement following the release of the Copernicus data, U.N. Secretary General António Guterres said, “We have always lived through hot summers. But this is not the summer of our youth. This is not your grandfather’s summer.”

If this year’s unprecedented heat continues, it will likely result in 2015-2019 being the hottest five years on record. The previous hottest month ever recorded was July 2016 — and nine of the 10 hottest Julys ever have all happened since 2005.

“July has re-written climate history, with dozens of new temperature records at local, national and global level,” Petteri Taalas, secretary general of the World Meteorological Organization, said in a statement earlier this month.

Indeed, the summer of 2019 will be remembered for Arctic fires, melting Antarctic sea ice, and dangerous heat waves across several continents.

Iceland, for instance, officially lost its first glacier to climate change. Scientists will be installing a plaque this month to commemorate the sombre milestone. It reads: “In the next 200 years all our glaciers are expected to follow the same path. This monument is to acknowledge that we know what is happening and what needs to be done. Only you know if we did it.”

And over the course of July, Greenland’s ice sheet melted dramatically — 197 billion tons of water from the glaciers flowed into the North Atlantic. This is enough to raise global sea levels by 0.02 inches (0.5 millimeters).

These events follow last year’s summer which was similarly filled with rare but devastating late-season hurricanes and historic, deadly wildfires — all trends scientists say can be expected in a warming world.

Kyla Mandel is the editor for the climate team at Think Progress. Her work has appeared in National Geographic, Mother Jones, and Vice. She has a master's degree from Columbia University’s Graduate School of Journalism, specializing in science, health, and environment reporting. You can reach her at [email protected].