It’s Time for Biden to Tackle Impunity in Africa 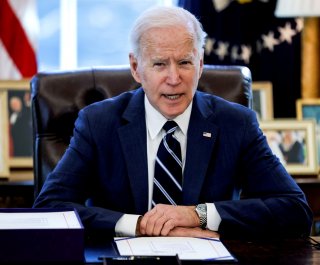 The United States’ policy on Africa has historically involved an uncomfortable calculus: better the devil you can control than the devil you can’t. Democratic and Republican administrations alike have accepted as an immutable reality that the violent strongmen and presidents-for-life impeding democracy and feeding corruption are necessary for the stability of the region.

President Joe Biden has talked a big game on breaking this cycle, promising to put human rights at the center of U.S. foreign policy. The question is will there be action to meet these lofty words? So far that has been less than clear.

Though his predecessors have been willing to forgive and forget, Biden has indicated that his administration will be less friendly toward the not-so-former warlords reaping the benefits of Africa’s graft-plagued governments.

In Somalia, Secretary of State Antony Blinken warned that President Mohamed Abdullahi Mohamed’s attempts to expand his term could provoke sanctions in coordination with the EU.

In Ethiopia, where some 2,000 people have been slaughtered in a state-sponsored ethnic cleansing campaign in Tigray, Biden has been a lot more measured with his words. The fact that Ethiopia is a critical partner for stability in the Horn of Africa appears to trump human rights concerns.

But Washington is showing more promise in terms of tackling corruption in a targeted manner, with the selective application of sanctions to address the cogs in the corruption machines powering many African states.

This trend is particularly clear in Liberia, one of the United States’ oldest partners in the region, where the United States recently sanctioned Harry Varney Gboto-Nambi Sherman over a bribery scheme involving Liberia’s iron ore industry. Additional targets reportedly in the Treasury Department’s crosshairs include Benoni Urey, a telecoms magnate who helped former President Charles Taylor evade sanctions and stockpile arms during the war, as well as an array of judges accused of corruption by their own Chief Justice Francis Korkpor.

Amid the trials of warlords like Gibril Massaquoi, who is alleged to have committed massacres, rape, and torture of Liberian civilians from 2001 to 2003, the Biden administration’s focus on war profiteers-turned-politicians is a telling indication that Biden is focused on the architects of war as well as its perpetrators.

Liberia shares a unique history with the United States. Originally a colony founded by former slaves from the United States, the Americo-Liberian settler class dominated and excluded the indigenous majority for decades. By 1989, simmering ethnic and tribal tensions exploded into years of brutal civil conflict that killed thousands, displaced millions, and spilled into neighboring countries. The war also generated a vast black market of arms, diamonds, timber and other natural resources, catering to everyone from rebel militias to Libyan dictator Muammar Gaddafi and Al Qaeda.

Though Liberia has since transitioned to a stable democracy, many of the actors who participated in the conflict managed to parlay their wartime power into political and business careers.

Urey, for example, somehow appropriated Taylor’s shares of Lonestar Cell, Liberia’s largest telecommunications network, after Taylor was convicted of war crimes in 2007. In 2008, former Secretary of State Condoleezza Rice privately recommended against removing Urey from the Office of Foreign Assets Control (OFAC) sanctions list because of the ongoing threat he posed to peace and security in Liberia and the region. However, Urey was one of several who benefited from what amounts to blanket amnesty for former Liberian warlords and war profiteers under OFAC sanctions in 2015. He is now a possible candidate for vice president in 2023.

Biden’s departure from Obama-era policies like the 2015 mass de-listing is a promising signal of his commitment to accountability on human rights and corruption. However, the deciding factor in whether Biden’s Africa policy will meaningfully improve on that of his predecessors will be his willingness to question outdated thinking on U.S. Africa policy. For example. the idea that giving gunrunners and warmongers a place in government will make them anything other than gunrunners and warmongers is now outdated and never was realistic.

In countries throughout the continent, endemic corruption and entrenched inequality have fed internal conflict and held back development for decades. In Liberia’s case, the United States’ special relationship with the country adds extra weight to efforts to address the conditions that could lead to fresh instability and a remobilization of ethnic divides along wartime lines.

Balancing security interests with accountability in Africa need not be a zero-sum binary. Past presidents have often employed reactive policies toward the continent, rather than proactively engaging with the root causes of conflict and corruption while neutralizing known bad actors before they have a chance to wreak havoc. As the Biden administration prepares the U.S. diplomatic machine to re-engage with the region, it must be equally aware of the danger of inaction. The reality is that for many countries in Africa, we already know who will start the next war.

Colonel (Retired) Wes Martin has served in law enforcement positions around the world and holds a MBA in International Politics and Business.