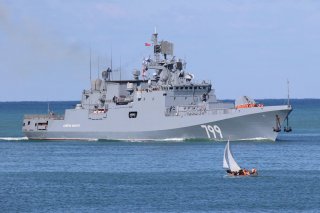 The Russian Navy has continued to conduct maneuvers and exercises on an increasingly regular basis, and this week warships from its Black Sea Fleet were deployed to naval ranges for drills, the Fleet’s press office announced. During the week, the ships’ crews will reportedly conduct sole and joint artillery and missile firings against naval, coastal and air targets.

In addition, the sailors of the Black Sea Fleet will also practice marine training elements, including joint deployment and maneuvering in various formations.

“The Black Sea Fleet’s 37 surface ships, boats and support vessels have deployed to naval ranges for a series of naval drills,” the press office said in a statement as reported by Russian state media. “At the initial stage, the crews practiced emergency response preparedness for a battle and their deployment with the subsequent departure from the bases for the designated areas.”

The training period also included for the first time a review of the ships in Sevastopol, where the Black Sea Fleet commander reviewed the formation of ships aboard a communications boat while he checks the forces’ readiness for accomplishing assigned missions.

This is just the latest show of force from the Black Sea Fleet, and follows a show of force in April that included live-fire drills and exercises against simulated targets. The patrol ship Vasily Bykov and the small anti-submarine warship vessels Kasmov and Yeisk conducted drills in the Black Sea to search for and track a notional, or theoretical, enemy submarine. The crews also took part in comprehensive training that included employing torpedo weapons and carrying out bombings against the enemy. In the course of the operations, this included searching for and tracking a submarine.

The Black Sea Fleet has existed in one form or another since 1783. It was formed to support Imperial Russia’s campaigns against the Ottoman Empire, while during the Second World War, the Fleet battled Axis forces during the sieges of Odessa and Sevastopol. When the Crimean Peninsula fell, the Fleet operated out of Soviet Georgia and aided in efforts to push out the Nazi invaders.

Because Russian ships must pass through the Turkish-controlled Bosporus Strait to enter the Mediterranean—and would be confined to the Black Sea in the event of a NATO-Russia conflict, the Black Sea Fleet has only a few large ships for blue water operations. However, it still remains a powerful naval force in the region.

The flagship of the Black Sea Fleet is the Moskva, the first of three Slava-class cruisers dating from the Soviet era in the 1970s. Described as “aircraft carrier killer,” the cruiser was previously deployed near the Syria-Turkish border to help defend Russian aircraft that had participated in the military campaigns of Syria. It is armed with anti-air and anti-ship missiles, as well as anti-submarine mortars and torpedoes.

In April, the Rostov-on-Don returned to join the Russian Navy’s Mediterranean Task Force, so it is unlikely the boat will be taking part in this week’s exercises.