It Can Kill Within 50 Feet: Box of Armor-Piercing Grenades Was Somehow Lost 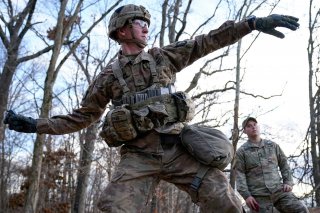 A box of thirty armored-piercing grenades, which were believed to have been stolen from a train bound for Pennsylvania, was recovered in an Atlanta backyard in February 2018. The canisters of grenades had begun its journey at Blount Island, a U.S. Marine Corps depot in Jacksonville.

How the ordnance of 40-millimeter rounds for the MK19 grenade launcher ended up there is anyone's guess. Still, the fact that the box of stolen grenades was so callously abandoned should be of serious concern.

Each round was capable of penetrating three inches of steel and has a “kill radius” of nearly fifty feet. The original canister was also packed with thirty-two rounds, but just thirty were recovered.

Even more disturbing than the fact that such deadly ordnance was stolen and then seemingly thrown away—with two still unaccounted for—is the fact that this isn't really all that unusual. The Associated Press highlighted in an exposé how the military's vast supply chain is so susceptible to theft. Items are largely unguarded and boxes aren't always accounted for.

Another Associated Press investigation found that at least nineteen hundred U.S. military firearms had been lost or stolen during the 2010s, and some of those weapons were used in violent crimes. The most common weapons that have been stolen have included M4 carbines, M240 machine guns, M16 rifles, M9 pistols, Browning M2 .50 caliber machine guns, Mossberg tactical shoguns and M203 grenade launchers.

According to the Associated Press, dozens of those weapons have been stolen—and while some have been recovered, many have not. The question is how does this happen?

In March, the inspector general for the Department of Defense (DoD) issued a report, Audit of the Department of Defense's Ground Transportation and Secure Hold of Arms, Ammunition, and Explosives in the United States, which found that DoD protected arms, ammunition and explosives (AA&E) was often not always transported in accordance with the Defense Transportation Regulation. This included trucks that were parked at non-secure local truck stops for extended periods or on streets.

“Any mishap with AA&E can be catastrophic,” the report warned. “In addition, when AA&E is stolen, damaged, or exploded, the DoD must replace that ammunition, which costs time and money and can hamper operations if the AA&E is not available when needed.”

The cost shouldn’t be understated. Each M4 carbine may only cost around $700, each M240 can cost upwards of $9,000, while an M2 can be $14,000 or more. In addition to taxpayers having to foot the bill, there is a very serious danger that these weapons present to the general public. The potential carnage that could be caused by a civilian AR-15 could be exponentially dwarfed by that of an M2, M240 or most notably a 40-millimeter grenade!