Is It Time for America to Start Selling Diesel Submarines Again? 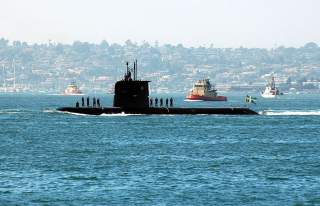 Between World War II and 1980, the United States supplied about a quarter of the world’s non-indigenously built submarines. But as the United States transitioned its submarine fleet from diesel to nuclear powered, it stopped providing its decommissioned submarines to allies.

Maybe this didn’t matter. If America’s submarine-producing allies continued selling submarines to the countries America militarily supported, then there might be no impact overall. On the other hand, if the United States’ allies could not obtain submarines or worse, America’s rivals took over its submarine supplying role, America’s strategic position could have been hindered.

The history of American submarines is rich and storied. The United States was, in fact, the first to use submarines in combat: during the War of Independence, American revolutionaries used the ‘Turtle’ submersible to attempt to plant a bomb on a British flagship. In the subsequent centuries, submarines have been used extensively and to great effect: German U-Boats in World War I, for instance, sank an estimated five thousand ships. This threat prompted the famous quote from Winston Churchill: “The only thing that ever frightened me during the war was the U-Boat peril.” With the advent of the nuclear age, submarines gained a second purpose: nuclear deterrence. Submarines equipped with nuclear weapons and capable of remaining underwater for months became strategically vital tools for projecting power and enforcing the Cold War doctrine of mutually assured destruction.

As submarine capabilities improved due to onboard nuclear reactors, the allure of diesel-electric powered submarines declined. In 1954, the USS Nautilus was commissioned, culminating a two-year process by General Dynamics to design and build the first nuclear submarine. Its launch and subsequent record-breaking run, including stunts such as completing a submerged transit of the North Pole, heralded a new era a submarine warfare. For major powers, especially the United States and USSR, diesel-electric submarines suddenly became less strategically vital tools.

A year after the USS Nautilus made her transit of the North Pole, the USS Blueback was launched. The Blueback held the distinction of being the last U.S. diesel-electric submarine to be commissioned, and when it was decommissioned in 1990, the United States’ submarine fleet became solely nuclear. At its decommissioning, Robert H. Gautier, the retired captain who commissioned the submarine, stated: “This is the end of an era. We must give way to progress.”

But this progress came at a cost: The United States could no longer give, loan, or sell its decommissioned submarines to its allies. These recipient countries had included Brazil, Turkey, and Taiwan, the latter of which has struggled ever since to procure submarines in its struggle with China.

Certain other countries had some capacity to build their own submarines, but advanced attack submarines generally came from a select handful of suppliers. Today, the largest of these include China, France, Germany, Russia, and the United Kingdom. Utilizing a compiled, but amateur and imperfect, ledger of submarine sales and network analysis software, we can begin to understand what impact, if any, the United States’ withdrawal from the market had.

There is little shock that during the Cold War, NATO allies and Warsaw Pact allies typically sold and received submarines from each other. But some other relationships of note emerge: first, in the Cold War era, the three countries straddling the East and the West were Poland, Indonesia, and India. In the post-Cold War era, only India and Pakistan remained as the last two countries maintaining that fine balance.

Second, in addition to the United States, the United Kingdom significantly cut back exports of submarines in the post–Cold War era. Whereas each country was the center of its own extensive network during the Cold War, of the two countries in the post–Cold War era, the United Kingdom was the only with any exports. (After Canada cancelled its nuclear submarine program, it reached an agreement to procure an Upholder-class from the UK for $750 million.)

Third, Germany has maintained the most robust network of recipient countries. A large component of this continued success is attributable to sales of the Type 209 submarine and its variations. This diesel-electric submarine is developed by Howaldtswerke-Deutsche Werft specifically for export, and retailed (in the case of South Africa in 2006) for $285 million each. Other popularly exported submarines since World War II include the United States’ Balao and Russia’s Kilo, Romeo, and Whiskey classes, but none sold more than the Type 209.

Carefully observing the networks, however, it’s clear that any initial worries were unfounded. None of the countries that the United States sold to during the Cold War were subsequently picked up by Russia or China. Yet while none of the countries may have shifted their import-behavior to favor the East, it’s possible that certain countries that the United States would like to have submarines faced difficulties procuring them.

This indeed seems to be the case. To supply its allies, the United States must rely upon other suppliers. Reliance isn’t just a theoretical complication: it has already fomented ramifications. Take the example of Taiwan. Since its last submarine procurement from the Netherlands in the early 1980s, Taiwan has continually attempted to procure submarines to counter the growing Chinese naval threat. But due to Chinese pressure, European shipbuilders and countries have refused to sell or supply Taiwan. While the United States attempted to broker a deal for Taiwan in the 2000s, its lack on indigenous diesel submarine production capabilities ultimately shelved the deal.

It makes little strategic sense for the United States to sell or give away its prized nuclear submarines, even to its allies. Without this ability, and without a current pipeline of diesel submarines, the United States risks limiting its allies’ ability to force-project and risks losing military ties to other nations. China, for instance, has the largest diesel submarine factory in the world, capable of churning out four submarines at a time. Its recent sales of Type 035 and Type 039 submarines to Bangladesh and Pakistan respectively indicates a willingness to potentially use submarine sales as a new means for alliance-building and support.

Thus, while the argument around diesel submarines has often centered around their costs and abilities with regards to the United States naval force, perhaps it’s time to reorient the discussion around the supply of American allies. As the territorial dispute in the South China Sea continues, the submarine forces of American allies will become increasingly important in checking China’s projection of power. Restarting America’s diesel engine submarine production would take years and billions of dollars and may not even come in time to impact the South China Sea struggle. But should other countries not make the leap to nuclear submarines, and should diesel submarine technology continue to improve, it would make long term sense for the United States to begin discussing or debating the merits of diesel again.