It's Time For America To Rethink Its Confederate Monuments 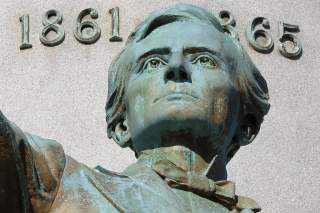 The Virginia Museum of Fine Arts unveils the latest addition to its collection this week: a twenty-seven-foot-tall bronze statue of a young black man mounted on a powerful steed, whose classical pose contrasts with his dreadlocks, jeans, and Nike high-tops. Titled “Rumors of War,” the piece by Obama portraitist Kehinde Wiley that previously stood vigilant over Times Square will now have a permanent home in Richmond, Virginia, located a mile from the monument to Confederate general J.E.B. Stuart that inspired it.

The former Confederate capital remains largely unaffected by the debate over Confederate monuments that has roiled the nation for the past half-decade, although it is unclear if Wiley’s statue will generate any new sparks. The same cannot be said for neighboring cities. In Charlottesville, Virginia locals still struggle over a monument to Robert E. Lee, now notorious for its association with the “Unite the Right” rally that left a counter-protester dead in 2017. A state over, students at the University of North Carolina are protesting the school’s decision to pay $2.5 million to the Sons of Confederate Veterans to relocate and preserve a statue known as “Silent Sam” that had marked the campus for decades.

As the monuments controversy rages on, the way forward remains uncertain. Nevertheless, Wiley’s work offers an opportunity to reflect on three important considerations for citizens, policymakers, and historians alike as they grapple with this critical issue.

Monuments exist both in the past and the present

The VMFA’s decision to place Wiley’s statue within walking distance of a road famous for its assembly of Confederate monuments touches on a common compromise posited in the monuments debate. Instead of tearing down statues, proponents argue, communities should commission memorials celebrating figures who fought for the Union and slavery’s demise.

This argument has received backing from some historians, notably leading Civil War scholar and University of Virginia professor Gary Gallagher. In Civil War Places: Seeing the Conflict through the Eyes of Its Leading Historians, an edited volume published this year, Gallagher thoughtfully supports creating new monuments while preserving and contextualizing old ones, using Charlottesville as a case study.  “Should all [Confederate] monuments go, the opportunity to draw lessons from a valuable interpretive resource regarding Charlottesville’s connection to the Civil War and the conflict’s long-term resonance will disappear,” he contends. Instead of removing these artifacts of history, Gallagher asks his readers “to imagine standing near the [Robert E. Lee] statue and seeing, across the small park, a memorial to the U.S. Colored Troops soldiers. What better way to engage with history and memory and the changing nature of historical landscapes?”

Gallagher’s research focuses on the construction of memory, and he has valid concerns about disturbing pieces that are vital primary sources for historians who work in this subfield — actions he compares “to destroying records or images.” But of competing importance is the special function that monuments play in society. Unlike a journal or letter tucked away in an archive, a monument is designed specifically for the living. The term itself comes from the Latin monere, “to remind,” and current generations must interrogate what the creators of these statues want us to remember — or forget.

Another proposition in the monuments debate contends that the fate of Confederate statues should depend on when they were created. As fellow historian of Civil War memory Thomas J. Brown notes in volume four of the New Encyclopedia of Southern Culture, roughly seventy-five percent of monuments erected in the South prior to the 1890s were simple “funereal obelisk[s]” placed at Confederate cemeteries. Unlike their northern counterparts, southern women led the charge to memorialize the dead in the decades immediately following the end of the Civil War, in the same way that that they had coordinated the burial of their dead brothers, sons, and husbands.

This pattern changed as the South recovered in earnest at the turn of the century, which shifted remembrance efforts to city streets and town squares. Images of soldiers and Confederate leaders quickly dominated the memorial landscape, like another Confederate memorial in Charlottesville that depicts a proud, rifle-bearing infantryman. The Daughters of the Confederacy installed this statue in front of the Albemarle County Courthouse in 1909, accompanied by text that combines the true anguish of those grieving fallen friends and family with the language of the Lost Cause: “Your Fortitude Under Privations: Teach Us How to Suffer and Grow Strong ‘Lest We Forget’ / Confederate Soldiers Defenders of the Rights of the States.”

Once again, competing interests emerge. While individuals entirely disconnected from the war established many Confederate memorials — Lee statue commissioner Paul Goodloe McIntire, for example, was five years old when the war ended — southern women were responsible for many of the most prominent monuments in cities like Augusta, Jackson, and Richmond. As renowned Civil War professor James McPherson cites in What They Fought For: 1861-1865, a study of nearly a thousand letters and diaries by Union and Confederate soldiers, this was their response to a conflict that had led loved ones to die in the name of those “who call upon [us] to defend their homes from pillage.”

Even so, we must be honest about what else these men fought for. A member of the 4th Kentucky Confederate Infantryman summed it up well: “We are fighting for our liberty, against tyrants of the North … who are determined to destroy slavery.” McPherson notes that only twenty percent of the letters that he analyzed contained explicit proslavery sentiments, while the rest preferred invoking comparisons to the Revolutionary generation’s struggle against oppression. Nevertheless, his study concludes that Confederate soldiers “took slavery for granted as part of the southern way of life for which they fought … none at all dissented from that view.”

It’s not if, but how we remember

It is because Confederate monuments both encapsulate true bereavement while obscuring the horrifying rationale for secession that they elicit such passion among modern defenders and detractors. However, a monument that only speaks to half of the story is deeply problematic. There is a real difference between obelisks signifying the respect that all humans deserve in death and the triumphant figures that served as menacing reminders to African Americans of their place in the Jim Crow south. If all tributes to Lee focused on his honorable decision to surrender to Ulysses S. Grant at Appomattox, perhaps we wouldn’t be having this debate at all.

There are answers to this dispute, which must be reached after honest, well-informed, and empathetic conversations at the community level. One possibility is to preserve those Confederate monuments that mark the resting place of the dead and remove the rest to museums that can best preserve them and contextualize their origins. Another is to build new statues that help us remember those who supported the cause of Union and freedom or were paragons of Southern valor in other epochs, such as John Laurens, Freddie Stowers, or Douglas MacArthur. Monuments and icons that stand in the public square like Wiley’s “Rumors of War,” which celebrates black achievement, should help us reflect on the best versions of our society, swelling “the mystic chords of memory” that bind us together in a more perfect Union.

This article by Nicole Penn first appeared at the American Enterprise Institute.