It's True: Russia's Orion Drone Has Seen Combat in Syria 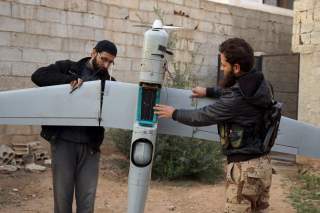 Key point: Moscow has been testing many new weapons in Syria. Here's how the Orion drone performed.

Russia’s Orion drone has completed combat trials in Syria and is now beginning to equip units in Russia for further testing, state media reported on Nov. 1, 2019.

The armed, satellite-controlled Orion, a product of the Kronshtadt Group, roughly is similar to the U.S. Air Force’s own Predator drone, which the American flying branch retired in 2017 after the type had served for more than 20 years. The U.S. Air Force continues to operate larger Reaper drones from the same manufacturer, General Atomics.

"The Orion drone in its attack configuration can carry up to four missiles, which it successfully test-fired in Syria,” an unnamed source told TASS. “The drone has started arriving for Russian troops for its operational evaluation, after which the command will make a decision on launching it into serial production and accepting it for service."

TASS described Orion as a “medium-altitude, long-endurance drone with a maximum takeoff weight of one ton and a maximum payload of 200 kilograms. The drone has a service ceiling of 7.5 kilometers and its maximum flight duration with the standard payload is 24 hours. The drone can develop a speed of up 200 kilometers per hour.”

It’s unclear when or how long Orion was in Syria and exactly what missions it performed. But the drone’s apparent success signals an important turning point for the Kremlin, which has lagged far behind the U.S. and even Chinese militaries in the development of armed, unmanned aircraft.

“Russian forces are starting to get its ‘missing element’ -- long-range [intelligence, surveillance and reconnaissance] and combat UAVs that were not available to the military until recently,” Samuel Bendett, an adviser at CNA and a Russia-studies fellow at the American Foreign Policy Council, told The National Interest.

“Syrian experience displayed to Russian forces the need to have available drones that can range for hundreds of kilometers and then deliver a strike, without [troops] calling for manned aviation and without putting manned aerial assets at risk,” Bendett added.

“With Orion in Russian forces, a significant gap in ISR and strike capability can be closed. While mass use of this UAV is still some time away, the fact that it was supposedly tested in Syria signifies the Russian ministry of defense's drive to acquire sophisticated weapons that can extend Russian forces' operational range while giving them greater precision capabilities.”

The Kremlin has not disclosed what kinds of munitions Orion carried in Syria. U.S. armed drones routinely carry small, GPS-guided bombs as well as laser-guided anti-tank missiles. Kronshtadt Group has demonstrated munitions and bombs that weigh up to 50 kilograms, making them small enough for Orion to carry without sacrificing much of its performance.

The Kremlin is working on several types of drones. Perhaps most notably, a heavyweight, jet-powered fighter drone appeared in public for the first time in January 2019. The Hunter-B is a rough analogue of the U.S. military’s MQ-25 tanker drone and RQ-170 spy drone as well as China’s Tian Ying.

As their development continues, Hunter-B and Orion could run into some of the same problems. Besides the relative immaturity of Russia’s efforts to produce small, guided weapons to arm the drones, there’s also the issue of manpower.

It takes hundreds of maintainers, operators and analysts effectively to operate a single “orbit” of three or four drones that’s capable of keeping a single UAV over a target area for long periods of time. The U.S. military has spent more than two decades developing a pool of manpower that now supports hundreds of Reaper drones organized into nearly 50 orbits.

Russia by contrast has just begun to train drone crews. But they’re learning fast, Tom Cooper, an author and drone expert, told The National Interest. "The first generation of pilots and ground crews for UAVs just completed their four-years-long training, and they meanwhile have plenty of experience in operating smaller UAVs in Syria."

According to TASS, the Russian air force is considering establishing mixed units to operate drones such as Orion alongside manned aircraft. That would represent a departure from the American model, which organizes unmanned aircraft into their own squadrons and wings.