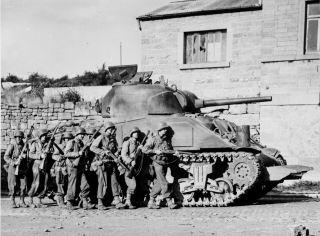 Writing on the Wall

In 1938, the German government began leasing a castle near the Austrian town of Wörgl. Though nominally under the administrative responsibility of Dachau concentration camp, the castle was reserved for important political prisoners, mostly of French nationality, and housed former prime ministers, prominent athletes, military generals, and even Charles Gaulle’s sister.

On May 3, 1945, Zvonimir Čučković, a Yugoslav resistance fighter that had also been detained at the castle, left looking for help. He carried a hand-written letter, in English, explaining the situation and asking for assistance to free the prisoners in the castle.

Though Čučković encountered the American 103rd Infantry Division, they were unable to mount a rescue that day. The next day, an armored American rescue group was assembled, but promptly called back. Meanwhile at the castle, the SS guards abandoned their posts and the prisoners after their commander deserted.

The same day, another attempt was made by the castle prisoners to contact a rescue party on the outside. Another messenger was sent out of the castle and into town. There, the messenger was somehow able to make contact with members of the Austrian resistance.

Though Wörgl had recently been abandoned by the regular German Wehrmacht army, Waffen-SS troops had taken up residence. These firm Nazi loyalists shot Austrian males, thinking them to be possibly Wehrmacht deserters, and anyone who hung a white flag of surrender from their house. Luckily for the castle messenger, a certain Major Josef Gangl was the head of the Austrian resistance.

Gangl was a decorated combat veteran of both the Eastern and Western front. He and a small group of approximately ten other soldiers stayed in Wörgl after the Wehrmacht had been ordered to leave. Disturbed by the SS’ wanton killing, they saw it as their duty to protect the town’s residents from the SS.

Gangl contacted elements of the 12th Armored Division in the area, and convinced an American commander, John Lee, to help liberate the castle. Though Lee had assembled a group of five tanks to pull off the mission, a nearby bridge they had to cross appeared too weak to support an armored rescue group, forcing Lee to leave all the armor, save his own tank, behind.

The meagre force of Lee and his Sherman tank, fourteen American soldiers, and Gangl with his ten soldiers, began to travel to the castle, where they encountered and destroyed a roadblock set up and manned by SS troops.

After the SS abandoned the castle, the French prisoners had equipped themselves with whatever weapons the guards had left behind. Their plight was not optimistic.

Before the Waffen-SS soldiers attacked the castle, Gangl had managed to phone members of the Austrian resistance in Wörgl, explaining the situation. The resistance sent reinforcements to the castle—two Wehrmacht soldiers and an Austrian youth.

On May 5, Waffen-SS troops, around 100 to 150 in number, attacked the castle and its defenders.

Lee had parked his tank and the entrance of the castle. From its high vantage point, the tank could pin down Waffen-SS troops. Despite being told to stay hidden inside the castle, the French prisoners refused, and fought using the weapons they had found inside.

Lee’s Sherman was quickly disabled by Waffen-SS fire, and the defenders were running low on ammunition. It was also unclear if any help would be coming—the castle’s phone line had been cut after Gengl’s call, severing contact with the outside.

In a stroke of nearly comic luck, one of the castle’s prisoners was Jean Borotra, a champion tennis player before the war. Borotra told Lee he could deliver a message, which Lee accepted. Borotra shimmied down the castle wall, ran through bushes and the Waffen-SS lines, and managed to find a group of American soldiers. Once they understood the situation, they dispatched a rescue group for the castle’s defenders, and quickly overran the SS lines, taking nearly 100 prisoners.

The only casualty of the battle for Itter Castle had been Gangl himself. While attempting to move former French prime minister Paul Reynaud, a sniper bullet had found its mark, killing him. Lee was awarded the Distinguished Service Cross, the Army’s second-highest award for gallantry and risk of life in combat.

Two days after the battle, Germany would surrender unconditionally, officially ending the European theater of World War II. A street in Wörgl bears Gangl’s name to this day, where he is honored as a national hero.