Japan’s Defense Minister: We Must Respond to China’s Naval Aggression 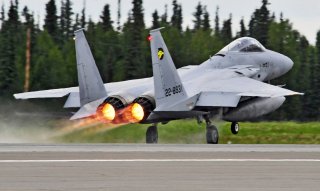 The Japanese defense minister is expressing serious concern about Chinese Coast Guard maneuvers in the Taiwan Strait and Sea of Japan near the disputed Senkaku Islands.

“We must not allow the coast guard law to undermine the legitimate interests of relevant nations, including Japan, and it is absolutely unacceptable if the law were to elevate tension in the waters, including the East China Sea and the South China Sea,” Kishi said during an appearance following a meeting with the Defense Secretary Lloyd Austin.

Kishi was clear about Japanese resolve to defend its territory “by all means,” a resolve echoed by U.S. leaders who cite  Article V of the Japan-U.S. Security Treaty which confirms a U.S. commitment to the defense of Japan.

During their recent meeting, both Austin and Kishi affirmed the importance of working with other allies in the Pacific theater to counter Chinese provocations and aggressions to include strengthening the scope and frequency of multilateral training and combat preparations exercises.

Kishi also appeared to reference the fast-growing number of Japanese military modernization efforts intended to strengthen their military and reinforce an alliance with the United States.

“On the strengthening of deterrence and response capability of the alliance, in order to strengthen our defense and to bolster our alliance, I explained that we continue to build up a multi-domain defense force under the National Defense Program Guidelines,” Kishi said.

In recent months, Japan has embarked upon a massive, multi-billion-dollar F-35 fighter jet acquisition, a move that not only brings more firepower and stealth attack capability to Japan but also introduces new dimensions of networking capability with the U.S. and other allied nations. In addition to its large F-35 jet buy, the Japanese military is already partnered with the United States on major U.S. weapons programs to include ship-based Aegis radar, SM-3 interceptor missiles, and high-altitude, long-endurance drones such as the U.S.-built Global Hawk. Japan’s defense against China at sea would likely be somewhat limited, a potential reason for its large F-35 acquisition. Japan operates thirty-seven destroyers, no carriers, and only twenty submarines, according to Global Firepower 2021.

Given its proximity to China and Taiwan, Japan offers a vital strategic opportunity for the United States to stage operations, conduct exercises, and engage in military-to-military cooperation aimed at sending a message to China. Certainly, surveillance missions or any kind of large-scale amphibious assault could be launched from the Japanese coastline.