Japan Just Launched a New Destroyer (And Its A Missile-Killer). 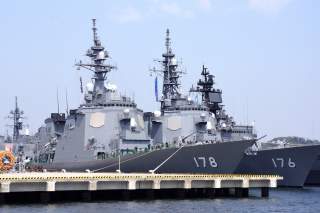 Japan has launched a new destroyer, and China isn't happy about it.

On Monday, Tokyo launched the first of two new 27DDG-class destroyers. The ceremony was held at Japan Marine United’s shipyard at Isogo Ward in Yokohama, south of Tokyo. According to Defense News, Defense Minister Itsunori Onodera also attended the launching.

Eventually, Maya and its sister ship will be armed with the SM-3 Block IIA missile that Japan and the United States are currently co-developing. The most advanced version of the SM-3 missile, the Block IIAs, are wider and can thus hold more fuel than earlier variants. This allows them to travel faster and further than their predecessors.

Most notably, the two ships will also be equipped with the Cooperative Engagement Capability (CEC). As the U.S. Navy explains:

In other words, ships equipped with CEC system serve as sensor and radar hubs with greater connectivity that allows for seamless cooperation across an extended battlefield. Thus, for example, the system could identify the ship that is best positioned to take out an air threat, improving efficiency.

In addition, the ship or aircraft trying to intercept the missile or aircraft can rely on radar provided by another ship. This is true even against maneuverable warheads where the interceptors need to be repositioned in flight.

As an analysis by Johns Hopkins University Applied Physics Laboratory, which helped develop the CEC system with Raytheon, puts it, “With the combination of precision gridlock, very low time delay, and very high update rate, a combatant may fire a missile and guide it to intercept a target, even a maneuvering one, using radar data from another CEC unit even if it never acquires the target with its own radars.”

Of course, Japan’s CEC destroyers will be able to link into a network with U.S. ships equipped with the same capability. Nor are they alone. Australia is installing a CEC system on at least one of its cruisers. This will naturally increase integration between their navies and act as a force multiplier.

All of this has got China nervous. Ahead of the Maya’s launch, the Global Times, a party-run tabloid, published an article titled “Japan destroyer with US air defense system threatens region.”

Zhang Junshe, a senior research fellow at a People’s Liberation Army think tank, told the Global Times that the "CEC will strengthen intelligence data sharing with the US... and strengthen their military alliance."

He added that the system would allow the United States to "better control Japan." Although Chinese strategists have often quietly suggested that the U.S. alliance can have a pacifying effect on Japan that is beneficial to China, Zhang doesn't believe that this is the case with the CEC.

“Once absolute security is realized by Japan and the US, they could attack other countries without scruples,” Zhang said with astonishing hyperbole.

The CEC is only one system that is using technology to enhance the bonds between the United States and its allies in the Asia-Pacific. The same is true of the F-35 Joint Strike Fighter. What makes the F-35 revolutionary is not how they operate individually but as a fleet.

“The ability of the planes to work with each other over a secure distributed battlespace is the essential foundation from which the air combat cloud can be built,” General Michael Hostage said in an interview when he was the commander of the Air Combat Commander. “And the advantage of the F-35 is the nature of the global fleet. Allied and American F-35s, whether USAF, USN, or USMC, can talk with one another and set up the distributed operational system.”

Furthermore, the F-35s are built for seamless integration with the Aegis systems, allowing for American and allied forces to have a more extensive and better-integrated picture of the battlefield and how to combat threats.