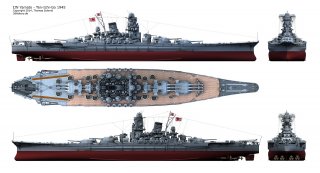 Key Point: In a society that seeks to atone for its warlike past, the Yamato remains a powerful influence in Japanese culture. Books and films about the ship and the SSAF have been produced, and museums and memorials to the behemoth, her crew, and the other doomed sailors of the ill-fated SSAF have been built. A television science-fiction series was created in which the wreck of the Yamato is used to create a starship bearing the same name. Some of the characters on the Starship Yamato bear the same names as their counterparts on the real Yamato.

Special Sea Attack Force (SSAF) was an ordinary-sounding name for the pitifully tiny remnant of what was once the mighty Imperial Japanese Navy (IJN). However, the word “Special” in the Japanese military possessed a unique and dark meaning.

The SSAF comprised just 10 ships. The first and foremost of these was the mighty battleship Yamato, the world’s largest dreadnought and pride of the IJN. She was to be escorted to her glorious death by the light cruiser Yahagi and eight destroyers: Asashimo, Fuyutsuki, Hamakaze, Hatsushimo, Isokaze, Kasumi, Suzutsuki, and Yukikaze, which were also scheduled to be sacrificed in a final attempt to cripple the American fleet.

The design and construction of these battleships began in October 1934––well before Japan attacked Pearl Harbor, although the Japanese Naval General Staff was even then planning for the inevitable showdown with the United States. Thus they ordered their Navy Technical Department (Kampon) to report on the feasibility of building a new generation of battleships that were superior to anything America had manufactured up to that time. The Japanese realized they could not match American quantity; the Americans could produce far more battleships than Japan ever might, but the Japanese designers felt certain they could build more powerful battleships than the Americans could.

The Japanese government expressed little doubt that these “super battleships” could be designed and built, and so, on December 29, 1934, it gave the required two years’ notice that, after December 31, 1936, Japan would no longer be a party to either the 1922 Washington and 1930 London naval treaties. Both agreements contained restrictions on Japanese naval armaments, something Japan now totally rejected. As of January 1, 1937, Japan unilaterally declared it would no longer be bound by these treaties or any restrictions whatsoever to its powerfully expanding military.

After the final construction plans for the three ships were approved in March 1937, they were quickly ordered into production under the Third Fleet Replenishment Program. Following tradition, each ship was named after a prefecture of old Japan. Not merely muscle-flexing or saber-rattling, Japan invaded China on July 7, 1937.

The Yamato was the first of what were to have been five Yamato-class battleships, but only three were built. The Yamato was commissioned on December 16, 1941, and the second Yamato-class ship, the Musashi, was commissioned on August 5, 1942. A third Yamato-class battleship, the Shinano, was in the works, but she was hurriedly converted into an aircraft carrier while still under construction, this conversion being made to help make up for the Japanese carrier losses at the Battle of Midway in early June 1942. The carrier Shinano was formally commissioned on November 19, 1944, but just 10 days later, on the second day of her maiden cruise, she was torpedoed and sunk by the American submarine Archer-Fish (SS-311).

The Yamato-class battleship characteristics, according to their final production plan, placed their overall length at 862.83 feet and their fully loaded displacement at 72,800 long tons (73,968 metric tons, 81,536 short tons). They had a top speed of 27 knots.  (By comparison, the new American Iowa-class battleships were 887 feet long, but displaced only 45,000 tons and had a top speed of 33 knots.)

Naoyoshi Ishida, an officer who served aboard the Yamato, recalled that when he first saw her, his initial thought was, “How huge it is! When you walk inside, there are arrows telling you which direction is the front and which is the back—otherwise you can’t tell. For a couple of days I didn’t even know how to get back to my own quarters. Everyone was like that…. I knew it was a very capable battleship. The guns were enormous. Back then, I really wanted to engage in battle with an American battleship in the Pacific.”

Both the Yamato and the Musashi were heavily armed and armored, and the Japanese firmly believed these battleships were unmatchable and unsinkable.

ns both battleships carried, as opposed to the nine 16-inch (406mm) guns on America’s top warships, the Iowa-class battleships. The Yamato’s armor-piercing 18.1-inch shells weighed 3,200 pounds each and could be hurled more than 25 miles at 40-second intervals. No Western battleship ever matched this.

A Reluctance to Use the Super Battleships

But the Japanese encountered difficulties with the Yamato and the Musashi soon after they were completed. Because of their weight, the two battleships consumed huge quantities of fuel oil, a product Japan did not have in great supply. Another consideration was the fact that the battleships were not only devastating weapons, they were also powerful symbols of national pride, and their loss would be a decimating blow to national as well as to naval morale. Thus, the battleships were to be used in battle cautiously, and not until late in the war, when the Japanese Naval General Staff saw the shadows of defeat darkening around them.

Various reasons for not using the Yamato were put forth, but Admiral Isoroku Yamamoto, the commander in chief of the Combined Fleet, the main oceangoing component of the IJN, displayed a reluctance to commit the Yamato, his flagship, to battle. Even after Yamamoto died when his plane was shot down by U.S. Army Air Force P-38 Lightning fighters on April 18, 1943, his successors did not involve either the Yamato or the Musashi in any significant combat until the closing months of the war.

The Yamato was given the name “Hotel Yamato” by the Japanese Pacific Ocean cruiser and destroyer crews. The battleship spent only a single day away from her Japanese Truk Island naval base in the Caroline Islands during the period between her arrival on August 29, 1942, and her departure on May 8, 1943. Nor did she take part in the critical Solomon Islands Campaign, which began on August 7, 1942, and lasted through February 1943.

While on patrol in December 1943, the Yamato was damaged by a torpedo launched from the USS Skate (SS-305), which struck fear in the hearts of the IJN admirals, who did not want to lose her. She finally saw action during later stages of the war, participating in actions in the Philippine Sea and then as the command ship of Admiral Takeo Kurita, when she devastated a small American fleet off Samar.

“The Most Tragic and Heroic Act of the War”

By early October 1944, the Americans had “island-hopped” their way across the Pacific and were preparing to invade the Philippine Islands. The Japanese naval defense plan was code-named named Sho-I-Go (“Victory”), and its objective was simple: Sink the American invasion fleet, maintain the Japanese occupation of the Philippines, and, by doing this, protect Japan from invasion.

To accomplish this goal, the Japanese committed virtually everything that was left of the IJN in a desperate effort to destroy the American invasion force. However, they were committing what remained of a navy that had no air support left. Significantly, both the Yamato and the Musashi were committed to stop America at what became known as the Battle of Leyte Gulf.

On October 24, 1944, the Musashi was sunk during this battle by 17 bomb strikes and 19 torpedo strikes; 1,023 of the Musashi’s crew of 2,399 perished, while the Americans lost 18 planes. The Yamato suffered relatively little significant damage during the battle and slipped away.

The Japanese were beaten at Leyte Gulf and the Americans pushed closer to the Central Japanese Home Islands by invading Okinawa in Operation Iceberg on April 1, 1945. Okinawa was in the Ryukyu Islands which, despite Chinese objections, had been incorporated into the Japanese empire in 1879. Because of this incorporation, the Japanese considered Okinawa a part of their homeland and would do everything to defend it.

The Japanese grew desperate as the American invasion of Okinawa was under way. The American success forced the Japanese to resort to the full deployment of their powerful last-gasp countermeasure, the “Special Forces”—the suicidal kamikaze, and, for the first time, this included the Navy. Japanese Combined Fleet commander in chief, Admiral Soemu Toyoda, overrode strong objections from members of his Naval General Staff concerning the naval usage of suicidal “special forces.” On April 3, 1945, he informed the men of his just-formed Special (Suicidal) Sea Attack Force that “the fate of our Empire depends upon this one action. I order the Special Sea Attack Force to carry out on Okinawa the most tragic and heroic act of the war.”