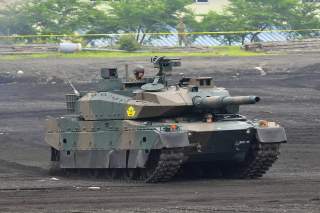 The weapons, intended to defend Japanese-controlled islands claimed by China, will be deployed by 2026, seven years faster than originally scheduled, according to Japanese media. The plan is to deploy an early model, and then a final version by 2026.

The bomb "would reportedly be launched by a missile, from which it would separate at a very high altitude and then fall at an angle at supersonic speed toward the target on the ground," the Japan Times said. The bombs would strike targets such as vehicles, fortifications and ships.

The missiles will be fired from mobile launchers. "The high flight speed of a glide bomb makes it difficult to intercept," the Japan Times said. "The bombs are expected to be launched from islands around an invaded or occupied remote island."

The missile would loft the bombs to an altitude of 20 kilometers (65,600 feet) before releasing the weapons to glide at high speed toward the target, according to the South China Morning Post.

Japan's Defense Ministry has already started development on the project, and requested 13.8 billion yen (US$122.2 million) for next year.

The Defense Ministry "is promoting the deployment of surface-to-ship guided missile units on Okinawa’s Miyako and Ishigaki islands in response to the Chinese military, which has stepped up its activities in the East China Sea, including waters around the Japanese-administered Senkaku Islands," said the Japan Times. "The missile units may be equipped with glide bombs."

"The Ground Self-Defense Force’s amphibious rapid development brigade will be mobilized in the event of a remote island being invaded, and an anti-surface strike capability is needed to help an effective execution of the brigade’s landing and recapture operations,” a senior ministry official said.

A glide bomb launched by missile has the advantage of ascending to a high altitude, where gravity allows the munition to achieve high speed as well as long range. Using a missile also means that a manned aircraft won't have to be allocated or risked as a bomb carrier.

However, relying on missiles to defend sovereignty over islands geographically closer to China and Taiwan than mainland Japan raises new issues. "Due to their long range, glide bombs, along with Japan’s planned long-range cruise missiles, could be construed as offensive in nature and therefore raise concerns in neighboring countries," the Japan Times said.

This is an understatement, considering that the neighboring countries include China and also Russia. Both have territorial disputes with Japan, both have nuclear arsenals and both just could misperceive a missile launch of a conventional glide bomb as something more powerful.