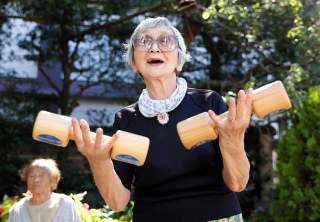 Population projections from the UN Department of Economic and Social Affairs confirm that Japan will remain the world’s most aged country for at least the next few decades. The 2019 Revision of World Population Prospects, released in June 2019, predicts the proportion of people aged 65 years and older in Japan will increase from the current level of 28 per cent to 38 per cent by 2050.

During this period, Japan’s population will shrink by nearly 20 per cent. These demographic trends set the fundamental context for challenges and changes to Japanese society in the coming decades.

Japan’s population has been getting older over the past 100 years, but this process accelerated at the turn of the century when the large cohort of post-war baby boomers, born in the late 1940s to early 1950s, began joining the elderly population. Between 2000–10, the country’s population aged 65 and over increased by an unprecedented 7 million. This population is likely to increase by another 7 million by 2020.

According to the government’s official population projections conducted by the National Institute of Population and Social Security Research (IPSS), the elderly population will continue to grow — though at a slower pace — until it peaks at around 2040, when the second baby-boomer generation (the children of the post-war baby boomers) passes the age of 65. At this time, a much smaller younger population will face the task of supporting this large number of elderly Japanese.

The ‘aging of the elderly population’ has serious implications for the public systems of medical and long-term care, pensions and social protection for older people. Much attention is being paid to the provision of care services, and in this regard knowing where older people live is fundamental to ensuring appropriate public policy and community responses. IPSS projections expect the most significant growth in Japan’s elderly population to occur in metropolitan regions, where there are currently relatively large working-age populations.

In some prefectures in non-metropolitan regions, on the other hand, the size of the elderly population has already peaked and started to decline. In these areas, the proportion of the elderly in the local population continues to increase because the younger component is shrinking at an even faster pace.

These regional variations in demographic prospects are due to heterogeneity in the population structure, rather than trends in vital components of population change such as mortality and fertility. Despite efforts by local governments to recover the fertility rate and reverse population flows to large cities, the rural population profile has become ‘too old’ to restructure in the short term. The aging population problem has reached the stage where the skewed age distribution causes negative natural increases (numbers of deaths exceeding numbers of births).

At the national level, Japan’s depopulation is moderated by the growing number of foreign residents, who presently account for just over 2 per cent of the country’s total population. As Japan’s natural population decline escalates, expectations have been rising for demographic and labour-market contributions to be made by international migrants. In the face of acute labour shortages, the amended Immigration Act came into effect in April 2019 to introduce new visa categories for qualified foreign workers in 14 industrial sectors, including nursing care, agriculture, construction and manufacturing.

The new visa categories are probably the most significant change in Japan’s immigration policy since the 1990 amendment that removed restrictions on entry and residence for foreign-born people of Japanese descent to facilitate economically-motivated migration from South America. It is hoped that the 2019 amendment will increase the pool of nursing and care workers, presumably from Southeast Asian countries.

It is still too early to assess the impact of the 2019 amendment to the Immigration Act. From a demographic perspective, it is important to keep in mind that the ‘targeted sending countries’ will face labour shortages themselves, particularly of care workers, in the not-so-distant future.

According to the latest UN population projections, many Southeast Asian countries will undergo population aging at an even faster pace than Japan due to drastic declines in fertility. What is expected from the global front-runner in aging are lessons and solutions from its evolving experience in building and maintaining public systems for an aging society.