Javits Center in Manhattan: What You Need To Know 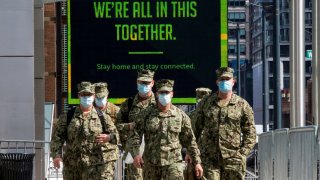 New York City remains the largest hotspot in the United States for the coronavirus outbreak. The city contains half of New York state’s positive cases—over 68,000—and has suffered over 2,700 deaths. The overflow of patients and bodies threatens to overwhelm the local health care system, with shortages of beds, supplies, and staff. In response to the crisis, federal intervention has helped convert the Javits Center in Manhattan as a makeshift hospital, along with providing the navy hospital ship the USNS Comfort.

The 2.1 million square foot convention center is named after New York Senator Jacob Javits, who died in 1986, the same year construction on the building was finished. Javits is tied as the state’s longest-serving senator, and from 1957 until 1981 he formed a political brand as the quintessential liberal Republican legislator. His 1980 primary defeat by the more conservative Al D’Amato aligned with the end of the “Rockefeller Republican” era.

It took one week for Senator Javits’ namesake to be converted from a place that once housed prodigious conferences to a hospital with enough space for thousands of patients. More than fifteen agencies, including local, state, and federal, contributed to the effort.

As originally conceived, the Javits Center was meant to house people recovering from surgeries, infections, and other non-coronavirus related illness. Meanwhile, the Comfort would take in exclusively people infected with the virus. This was switched in the last few days, and now the convention center expects to eventually be filled with thousands of positive test cases. Specifically, they will be taking in the less critical patients. Roughly 20% of people infected with the coronavirus require some kind of hospitalization.

"Hospitals are pulling off miracles on a daily basis," said New York Governor Andrew Cuomo. "But it is a monumental challenge to sustain this pace."

“Our current preference, which could change at any time given the circumstances on the ground and the request by the governor, is to see Javits Center beds used by Covid patients before moving them to the Comfort,” said a Pentagon spokesman on Monday. “We are very attuned to the need of New York City and New York state.”

At the moment, both the convention center and the ship have less than one hundred patients on board each. The ship is being operated by the U.S. Navy, while the U.S. Army has taken control of Javits. The medical personnel staffing the center are being provided by the Department of Health and Human Services.

Other open spaces in New York—including college dorms, stadiums, and sports fields—are being considered as possible housing for coronavirus as well. By the end of the pandemic the state expects to have tripled its hospital capacity.