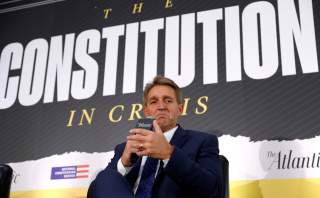 This is not the first time Flake has tweeted out a picture of a donation he’s made to a Democratic candidate.

Retired Arizona Republican Sen. Jeff Flake revealed his latest political donation Wednesday, which he made to the Democratic sheriff of Maricopa County, Arizona.

Flake tweeted a picture of a $100 check made out to “Penzone for sheriff.” The check was dated Tuesday with “county over party” written in the description. Also included in the tweet was a link to a Washington Post story about former Maricopa County Sheriff Joe Arpaio’s campaign.

The tweet appears to be Flake’s announcement that he is supporting Democratic Maricopa County Sheriff Paul Penzone, who is up for reelection in 2020, over Arpaio.

Penzone defeated Arpaio in the November 2016 elections, ending Arpaio’s 24-year reign on the job. During his career as Maricopa County’s top lawman, Arpaio famously branded himself as “America’s toughest sheriff” and became a household name for a number of tough-on-crime policies he implemented.

However, his management style didn’t come without legal issues. Arpaio was slapped with a criminal contempt charge related to his handling of suspected illegal aliens, something he referred to as a “witch hunt.” But he later received a pardon from President Donald Trump.

Flake’s tweet suggests the election is a binary choice between Arpaio and Penzone, but the GOP primary is far from over and there are several Republicans running for the nomination. Jerry Sheridan, the former chief deputy, and Mike Crawford, a Glendale police officer, are both running in the primary.

This is not the first time Flake has tweeted out a picture of a donation he’s made to a Democratic candidate.

Flake wrote a $100 check in Dec. 2017 to now-Alabama Sen. Doug Jones, who was able to win in a deep-red state amid accusations that his opponent pursued young girls earlier in his life. In that check’s description, Flake wrote “country over party.”

Faced with sinking poll numbers, Flake opted not to run for reelection in 2018. Since leaving the Senate, he has remained an ardent critic of the Trump administration.